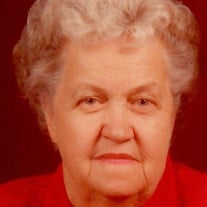 After a life of tireless service, Durene Snow Hutchinson was called home on September 11, 2021, at the age of 94. She has looked forward to a reunion with her husband, parents, sisters, and extended family for a long time; we are grateful that reunion has now taken place. Durene Snow was born in her grandmother's house in Raymond, Alberta, Canada, on November 14, 1926. (Because of an error recording her birthday--she never knew who made the error-- officially it was listed as November 15). Durene was the 2nd child of 5 born to Eunice Lybbert and J. Golden Snow. She had an idyllic childhood growing up in the rural town of Raymond. She had many friends with whom she had great fun, and she especially loved to ride her favorite horse named Bess. Durene was an excellent student who loved math and chemistry. She wanted to be a chemist but her father thought that was not a proper career for a young woman, so he counseled her to become a teacher. She graduated with a Home Economics degree from the University of Alberta and taught school for 2 years. After teaching, she decided to serve a mission for the Church of Jesus Christ of Latter-day Saints and was called to the French mission. It was while serving in La Chaux-da-fond, Switzerland, she met a young elder named Karl Hutchinson. They became good friends and after her mission ended, they rekindled their friendship and following a brief courtship, they were married in the Cardston, Alberta temple on December 26, 1951. Nine children followed: Terrie (Glen), Bill (Shirley), Judy, Mary, Karen, Kendall (Robyn), Sue, Trish and Rick (Elise). Her posterity has since grown to include 39 grandchildren, 58 great-grandchildren, and 8 great-great grandchildren. After her family had grown and Karl retired, Durene and Karl served two more missions, the first in the Tahiti, Papeete mission office and the other, as institute directors at the University of Bordeaux in France. Durene grew to love the people with whom they worked on these missions. One special highlight for Durene in Tahiti was teaching piano to a young lady named Eva, which she started doing when Eva was 14. As Eva grew older, Durene was told that Eva gave piano lessons and would not charge her students for their lessons, because Durene had not charged her. Durene was always grateful to have been part of this legacy of music with Eva. Throughout her life, Durene was always faithful in the gospel and served in whatever calling she was given. She was called once as Sunday School organist, even though she didn't know how to play the organ. After she was called, she taught herself to play so she could serve in this calling. Her cooking and sewing skills were admired by many and blessed her large family as she was raising them. Durene believed in helping others and always put that belief into action; one Relief Society president commented that often when she took dinner to a family, the family would tell her that Durene had already brought them food. Durene loved the gospel of Jesus Christ and the scriptures, she read The Book of Mormon every day, almost to the day she passed away. One legacy she wanted to leave her family is for them to know that she knows the Gospel of Jesus Christ is true, the scriptures are true, and to live faithful to the counsel of Jesus Christ that is found there. We, her family, are also grateful for her example of enduring to the end. Though her final years were not easy, she did not falter! Durene was preceded in death by her husband Karl, parents, 3 sisters, Donna Wright, Margaret and Mary Mehew, and a grandson Ryan Courreges. She is survived by her brother Gordon Snow, many nieces and nephews, her children, and grandchildren. A funeral will be held on Monday, September 20, 2021 at 11:00 am, at the Church of Jesus Christ of Latter-day Saints, 875 East 200 North, Kaysville, Utah. There will be a visitation with the family prior to the service from 9:30 a.m. to 10:30 a.m. Interment will be in the Kaysville City Cemetery and will take place immediately following the funeral. Our family would like to thank all of the Hearts for Hospice staff who took care of our mom during the last several months of her life, especially chaplain Brian Horrocks for his amazing support.

After a life of tireless service, Durene Snow Hutchinson was called home on September 11, 2021, at the age of 94. She has looked forward to a reunion with her husband, parents, sisters, and extended family for a long time; we are grateful that... View Obituary & Service Information

The family of Durene Snow Hutchinson created this Life Tributes page to make it easy to share your memories.

After a life of tireless service, Durene Snow Hutchinson was...