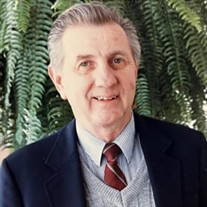 Dwight Christopher Poulos 1931 - 2021 Dwight. Christopher Poulos, age 90, passed away peacefully of natural causes on Christmas Day, December 25 2021 at his home in Orem, Utah. Chris was born in Richmond, Kentucky on Groundhog Day, February 2, 1931. He was the son of Melissa Baker and George C. Athanasopoulos. He was raised as an only child in the little town of Irvine, Kentucky. He graduated from Henry Clay High School in 1949. Chris started his college education by enrolling at Kentucky University, but not long after enlisted in the US Air Force. While serving in the military, he was taught the Gospel of Jesus Christ and converted to The Church of Jesus Christ of Latter-Day Saints… being baptized in 1952 at the Logan Square Ward in Chicago (you can ask any member or close friend about the details of that miraculous conversion story). After being discharged serving honorably with the USAF, he followed his desire and enrolled at Brigham Young University, and three years later graduated in 1957, with a BS degree in Psychology, he continued his schooling and received a Master’s degree in Counseling. While teaching in a BYU student ward Sunday School class, he met the love of his life, Gail Bartley, they were married shortly thereafter, and were sealed for time and all eternity in the Manti, Utah Temple on June 3, 1959. After marrying Gail, Chris quickly discovered his love and gift for teaching and soon became a faculty member at BYU, in the division of Continuing Education (CES), where he was the Director of the Campus Education Week. He also traveled extensively for BYU in that role and directed the Education Week’s in different cities throughout the country, he periodically taught Book of Mormon classes on campus, which included athletes from all backgrounds. Chris started a side career of managing and mentoring a number of talented entertainers and public speakers, including the Three D’s, Tony Ingle and Jason Hewlett. He loved serving for the Church. He was part of two Bishopric’s and after retiring from BYU, he particularly enjoyed serving a CES Mission with Gail in Indianapolis… being called as a Branch President for young single adults and happily knew of many marriages coming from that little Branch. Chris had an immense passion for BYU sports (we would need a whole other obituary to detail his love for all things BYU), and throughout Chris’ life, he and Gail adopted many many people along their long and charitable journey (you all know who you are). If you were fortunate enough to connect with Chris, you would very likely be treated by his absolute joy for life, his brilliant wit, and endless euphemisms….”root hog or die!” He was a devoted Disciple of Jesus Christ, husband, father, grandfather and great grandfather. His legacy is lovingly being kept alive by his eternal companion of 62 years, Gail Poulos, his children, Mark (Laurel), Shauna (Mark) Ewing Stimson, Kevin, Liz (Todd) Austin, his 10 grandchildren and 8 great grandchildren. He is preceded in death by his parents, son in law, Terrell Ewing, and granddaughter, Ashley Poulos. The family wishes to thank Yarrow Hospice for their wonderful aids and nurses, and owners who made his life a cherished experience this past year. Funeral services will be held at 11:00 am on Thursday, December 30, 2021 at the Orem Sharon LDS Stake Center, 545 South 800 East, Orem, Utah. A viewing will be held Wednesday, December, 29, 2021 from 6:00 pm until 8:00 pm. There will be a viewing Thursday morning prior to the funeral from 9:30 am until 10:45 am. Interment at Orem City Cemetery. For those wishing to participate in the service by Zoom: https://zoom.us/j/99878813472 Or One tap mobile : US: +12532158782,,99878813472# or +13462487799,,99878813472# Or Telephone: Dial(for higher quality, dial a number based on your current location): US: +1 253 215 8782 or +1 346 248 7799 or +1 669 900 6833 or +1 301 715 8592 or +1 312 626 6799 or +1 929 205 6099 Webinar ID: 998 7881 3472 International numbers available: https://zoom.us/u/accbuxgieK

The family of Dwight Chris Poulos created this Life Tributes page to make it easy to share your memories.