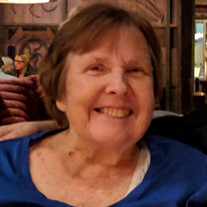 E. Jeanine Moyer passed away in the early morning January 15, 2021. Publicly known as Jeanine, she agreeably accepted countless nicknames, including—E, The Dutchess of Sherm, Sherma, Grandma Sherm, Aunt Jeanine, Grannio, Grandma, and Ma Mere. Born and raised in Salt Lake City, she and mon pere, Rod Moyer, were married in 1958 and lived over 30 years in California before returning to Utah in 1990. Together they brought 7 of us into the world: Kathy, Karen, Leah, Kurt Ruth, Anna, and Jason. Ma mere, a dedicated Neil Diamond fan, lived by the song lyric “reaching out, touching me, touching you” throughout her life. She touched so many, including all of her children, a large herd of grandchildren and great grandchildren, nieces, nephews…and so many others who were welcomed into our family with open arms by ma mere and mon pere. Ma mere enjoyed laughing, traveling, playing games, a good liar’s contest, and more than anything, being with her family. The feeling was mutual. I’m sure those who received her Christmas cards understand that she would expect me to list a few of her accomplishments: teaching Betsy Ross to sew, modeling for the Statue of Liberty, and helping Dolly Madison bake her little cupcakes and twinkies. She was creative, artistic, and fun. All of us know and will miss “the Look,” a classic ma mere-ism. Knowing that ma mere and mon pere are finally reunited brings much peace to our sad hearts. We will miss her terribly, but thinking of them together, laughing, “ROD!” The Look, talking about kids and grandkids, loving each other dearly—the puzzle is complete, ma mere has found Heaven. Assuming you see this…please, mon pere, give her a hug and kiss from each of us. We love and miss you both. Due to current limitations, there will not be a funeral, but a “zoom” graveside service from Camp Williams military cemetery at 1:00 on Thursday, January 21, 2021. We will do our best to send email invitations, but please call if you are (accidentally) missed and you will be forwarded the details to join, (801) 375-8270. All are welcome. She will not get away without a big celebration however. Tentatively planned for the first weekend in August we will have a “Jeanine Extravaganza” complete with the traditional liar’s contest, Neil Diamond music, food and games. I expect that ma mere and mon pere will be with us in spirit. Information to follow, call and let us know if you would like to be on the planning list. Farewell for now, Ma Mere. Thank you for all you gave to each of us.

The family of E. Jeanine Moyer created this Life Tributes page to make it easy to share your memories.

E. Jeanine Moyer passed away in the early morning January 15,...