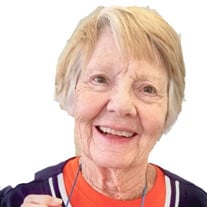 On Wednesday, July 8, 2020, Edene Ellen Acree, loving wife and mother, left this life to dance in the sunset, and sing to the angels at the age of 84, leaving all locked doors behind! Edene (Edie) was born on December 3, 1935 in Ogden, Utah to Buelah June (Frazier) and Edgar Dean Johnson. William Rudolph and Buelah June Kobel were her loving parents. She graduated from Ogden High School in 1954 and earned an Associate’s degree in 1969. She married Lee LePelley on April 14, 1955 and later divorced. On February 14, 1968 she married her best friend and the love of her life, Larry Allen Acree. They were blessed with 52 years, 4 months, and 24 days together and raised 4 children, Sue Ellen Turcotte (David), Amy June Johnstun (Doug), Sheri Anne Ritchie, and William Acree (Cathy). Edie was preceded in death by her cherished grandmother, Viola Keziah Crozier Frazier; her “momma and daddy”, Buelah “June” Kobel and William Rudoph Kobel. Also preceding her in death was her sister, Jolene (Gordon) Nelson and brother, David C. Kobel; grandchildren, Jenedie Sue Johnstun and Joshua Steffon Johnstun. Edie is survived by her husband, Larry and her four children, Sue, Amy, Sheri, and Billy. She is also survived by her grandchildren who gave her many, many precious moments which created a heaven on Earth for her. They are listed in order of appearance into her life: Michael Pritchett, Janica Johnstun, Michele Pritchett Cook, Jared Johnstun, Edene Turcotte Gathercole, Melissa Bassett, Larry Turcotte, Zachary Acree Chotia, Christopher Acree, Joey Johnstun, Kaylyn Acree Gorman, Jaz Johnstun, Jamirra Johnstun Rambos, Jamayca Johnstun, Justus Johnstun, Ted Eason, Nichole Eason Cunliffe, Zacchary Eason, Jackson Johnstun, Jasmine Johnstun, Bret Bergstrom, and Ryan Cook. Edie retired after many years from the Social Security Administration. Her job was a necessity, but her passion was always her family. Her infectious smile and continued support is the rock of her family. Late in life she and Larry fulfilled a lifelong dream of joining the Catholic Faith. She studied Catholicism and the Bible throughout her life. She loved to travel and planned each trip to the minute. Edie loved camping, the moon, and sunsets. She loved to laugh, especially with her grandchildren, great-grandchildren, and great-great-grandchildren! A special thanks to Avamere at Mountain Ridge Memory Care Unit who took amazing care of her. She was a true “red-head” that made sure everything was her way. Fun, feisty and finally free!! Her family will hold a private celebration of her life. In lieu of flowers please consider donations to the Alzheimer’s Association. https://www.alz.org

On Wednesday, July 8, 2020, Edene Ellen Acree, loving wife and mother, left this life to dance in the sunset, and sing to the angels at the age of 84, leaving all locked doors behind! Edene (Edie) was born on December 3, 1935 in Ogden, Utah... View Obituary & Service Information

The family of Edene "Edie" Acree created this Life Tributes page to make it easy to share your memories.