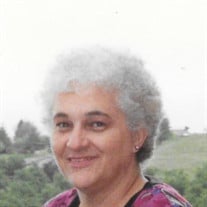 Edith Ann Laverne (Blanchard) Takacs, 81, was called home to her loving Heavenly Father on July 24, 2020. She passed away from natural causes at her son, Edward’s home, where she lived in Clinton, Utah. Edith was born to Leon William and Buell Laverne (Martin) Blanchard in Newberg, Oregon, on September 18, 1938. She was the eldest of six children. Edith married Richard William Takacs on July 20, 1962, and was sealed for time and all eternity in the Church of Jesus Christ of Latter-Day Saints’ Idaho Falls Temple. Over the years, their family lived in many places, including Germany and throughout the United States, while Richard served in the United States Air Force for 24 years, finally retiring in Tucson, Arizona. Edith moved to Utah after Richard’s passing. Always energetic, Edith worked in food services, store management, and the medical field over the years. Edith was a staunch member of the Church of Jesus Christ of Latter-Day Saints, as were her parents, siblings, and husband, as evidenced by how she raised her children. Her love of children included teaching primary for several years. She served a mission at the Church Layton Home Storage Center, which she extended three times. Edith loved working on genealogy and was known as the family historian. She was an extremely talented artist who enjoyed painting and drawing, beadwork, and other arts and crafts. She shared her talents with many. Edith is survived by her three children; Edward Leon (Debra) Takacs, Rita Marie Pouliotte, and Wes Warren (Jennifer) Takacs. Her 12 grandchildren and four great-grandchildren also survive her. Her surviving siblings are; Leon Leroy (Carol) Blanchard, Janice Kay (Ronald) Kelley, Beth Evelyn Marriott, Fairen William (Karen) Blanchard, and Jerril Eldon (Daneice) Blanchard. She was loved and adored by us all; she will be greatly missed. Friends may visit with family on Thursday, July 30 from 10:00 to 11:30 am at Rosewood Chapel, 125 Chapel Street, Layton. Memorial service will be held at 12:00 noon.

Edith Ann Laverne (Blanchard) Takacs, 81, was called home to her loving Heavenly Father on July 24, 2020. She passed away from natural causes at her son, Edward&#8217;s home, where she lived in Clinton, Utah. Edith was born to Leon William and... View Obituary & Service Information

The family of Edith Ann Laverne Takacs created this Life Tributes page to make it easy to share your memories.