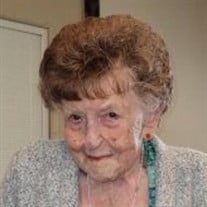 Edna Gertrude (Trudy) Christensen (Hansen) Muldowney passed away peacefully on November 14th, 2020 in Ogden, Utah at the age of 98. Trudy was born on October 23rd, 1922 to John and Anna (nee Hansen) Christensen in Pershing, Oklahoma, where John worked in the oil fields at the time. In 1925, John and Anna moved the family back to Askov, Minnesota, where they were originally from, and took up dairy farming. As Trudy grew up on the family farm, she learned early the value of thriftiness and hard work—especially in harvesting rutabagas and moving lots of rocks! Trudy attended elementary and high school in Askov, MN, graduating from H.C. Andersen High School. After graduation, she married her high school sweetheart, Carl Hansen. Trudy and Carl moved to Santa Barbara, California in 1941 and later moved to near-by Lompoc, CA in 1942. During World War 2, Trudy moved back to Askov, MN, to be with her parents while Carl served in the U.S. Army Infantry in France and Germa-ny. After the war, Trudy and Carl and their growing family moved back to Lompoc, CA, where she lived until 2006. In that year, she sold her house in Lompoc and moved to Roseburg, Oregon for a change of scenery and to be near one of her children and several grandchildren. In 2011, the sunshine of Titusville, Florida beckoned Trudy to move there, where she could be close to another one of her children and grandchil-dren. In 2020, Trudy moved to Ogden, UT to live near yet another one of her children and grandchildren. To Trudy, to always be near family was most important! Trudy was blessed with six children: Son, Barry Hansen (Zane, deceased); daughter, Linda Snowden (Wayne); daughter, Jerilyn Robbins (Bruce, deceased); son, Roger Hansen (Margie); son, Eric Hansen (Kathy); and daughter, Marci Thornburg (Terry). Trudy was further blessed with 23 grandchildren, 35 great-grandchildren, and 7 great-great-grandchildren. Trudy was preceded in death by her parents, her brother, Ray Christensen, and former husbands Carl Hansen and T.J. Spence. Trudy certainly lived a long and eventful life. She will be missed by her family and the many friends she made throughout the country. Trudy believed in God and salvation through His grace. Now she rests in true peace!

Edna Gertrude (Trudy) Christensen (Hansen) Muldowney passed away peacefully on November 14th, 2020 in Ogden, Utah at the age of 98. Trudy was born on October 23rd, 1922 to John and Anna (nee Hansen) Christensen in Pershing, Oklahoma, where... View Obituary & Service Information

The family of Edna "Trudy" Gertrude Muldowney created this Life Tributes page to make it easy to share your memories.