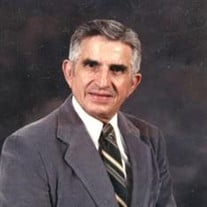 Edward Dean Arrington, 90, of Payson Utah, passed away at his home on June 6, 2017 from complications incident to his age and to Parkinson’s Disease. Ed was born in Wichita, Kansas on September 11, 1926, the eighth of nine children to John William Arrington and Leila Tuckfield. Not long after his birth, the family moved back to Utah. In August 1928, shortly after his younger sister was born, and when Ed was just 2 years old, his mother passed away from Pneumonia. A year later his father married Lila Hogge, who added two daughters to the family from a previous marriage. John and Lila later had two sons of their own, making 13 children in all. All members of the family were expected to work hard—even at a young age—to help support the family. At 7 years old, Ed, along with his 3 older brothers had the responsibility to sell newspapers on the street corners in Ogden, Utah. The boys were not allowed to return home until they had each sold 10 papers for the day. As the youngest, Ed would often be the last one to complete this task, and often had to walk home alone, even in the winter. Ed tried to join the Navy at age 17, but he was too short. The Navy required that applicants be at least 5ft tall. Finally, in 1946, at age 19, he was finally tall enough to join. Ed did not take life on the ship well. Ed used to say that “I was out to sea for 8 months, and I was seasick for 8 months.” Nevertheless, he traveled many places in the post-World War 2 Pacific theater, and loved serving his country. He was honorably discharged from the Navy in 1948. Following his military service, Ed moved to California, where his parents lived. He got involved in the young adult organization, the M-Men and Gleaner program, in the LDS Huntington Park Stake. There he met the girl that would become his wife. Ed married the love of his life, Elizabeth Ann Young on April 3, 1954. He would say that he “loved her so much he married her 3 times.” First, they eloped to Las Vegas, and did not tell anyone. Then just two months later, on June 5, 1954, with only their parents aware that they had married previously, Ed and Elizabeth held a formal wedding ceremony at an LDS Stake Center in Huntington Park, California. This second wedding was to please Elizabeth’s grandmother who had always wanted to share in her only granddaughter’s wedding. Three years later, on April 3, 1957, Ed and Elizabeth had their marriage sealed for time and all eternity in the LDS Los Angeles Temple. Ed and Elizabeth have 7 children, Vicki (Burt) Fessler, Edward (Regan) Arrington, Jr, Linda (Kevin) McDonald, still-born twins Dawn and Diana, and Robert and Martha, natural brother and sister who they took into their home as foster children in 1972 and adopted in 1977. In addition, Ed and Elizabeth have 16 grandchildren and 43 great-grandchildren. Grandchildren are Kristy (Fessler) Staker, Emily (Arrington) Frogley, Lindsay (Arrington) Condie, Stacey (Arrington) Leybas, Julie (Arrington) De Rurange, David Arrington, Michael Arrington, Steven Arrington, Laura (McDonald) Sturm, Lacie (McDonald) Black, Brittni (McDonald) Hewitt, Briana (McDonald) Pugh, Dayan McDonald, Devin McDonald, Amber Arrington and Michael Arrington. Ed took pride in working hard all his life. He operated his own janitorial business in Southern California for many years, often taking his son along as a helper. As the custodian for his LDS church building in Rowland Heights, California, he was always there to do whatever needed to be done including setting up and taking down chairs for virtually all activities. In 1977 Ed and Elizabeth sold their home in Rowland Heights and purchased Kizziar cleaners in Pomona, California. The company provided traditional dry-cleaning services, including cleaning uniforms for local fire and police officers, as well as drapery and carpet cleaning services. The company also began selling new products to their customers including draperies, carpet, and police uniforms and supplies. In 1989 Ed and Elizabeth sold the dry-cleaning business and moved to Utah. There Ed continued to work hard, up until Parkinson’s Disease began to take its toll on his physical health. In his younger years Ed did not follow sports closely, although he supported his children who were involved in high-school band and drill team, by attending high school football games. But his interest in sports began to change after attending the 1981 BYU Holiday bowl in San Diego. He instantly became a fan of BYU football. After moving to Utah, he started watching ALL BYU sports, often attending the games in person. He became a HUGE BYU fan! Ed was active in the church of Jesus Christ of Latter-day-saints all his life. He loved serving others, and would reach out to those in need—especially his wife and children—no matter how small or large the task. His life stands as an example to his posterity of service to others. Ed and Elizabeth served 2 LDS missions together. They first served a proselyting mission in the Texas McAllen mission from July 2006 until December 2007, then later a service mission at the Springville LDS Employment center from March 2014 until Ed was released because his health prevented him from serving. Elizabeth is still serving there. Ed is survived by his loving wife, Elizabeth, his children, Vicki, Ed, Linda and Robert, all 16 grandchildren and 43 great-grandchildren, his sister, Aline and half-brother, Ron. He was Preceded in death by his twin baby girls Dawn and Diana, his daughter, Martha, his parents and 10 siblings. Funeral services will be held Saturday, June 17, 2017 at 11:00am at the Elk Ridge 10th ward building, 1138 East 100 South, Payson UT 84651. A viewing will be held at the building prior to the service from 9:30 to 10:45 am. Interment will follow at Lehi City Cemetery. The family would like to express our gratitude to Comfortworx Hospice for their help in caring for Ed for the last 13 months. Their staff have been so wonderful and loving to him.

Edward Dean Arrington, 90, of Payson Utah, passed away at his home on June 6, 2017 from complications incident to his age and to Parkinson&#8217;s Disease. Ed was born in Wichita, Kansas on September 11, 1926, the eighth of nine children... View Obituary & Service Information

The family of Edward Dean Arrington created this Life Tributes page to make it easy to share your memories.

Edward Dean Arrington, 90, of Payson Utah, passed away at his...