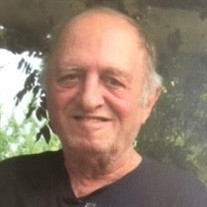 Edward Francis Crane 1942 - 2018 Edward Francis Crane passed away on the evening of June 9th, 2018, at age 75. He is survived by his two children, Matthew Crane and Ashley Rad. Edward was born in Boston, Massachusets. He spent most of his childhood on the streets and in the orphanages of Boston until he became old enough to join the army. He served his country in South Korea during the Korean War where he was nearly killed in a burning vehicle, but rescued at the last minute by his commanding officer. While in the army, he learned ballroom dancing, and after his military term of service expired, he moved to Salt Lake City, Utah and started his own ballroom dance business. Ed loved to dance and he loved to teach. He taught ballroom dance for nearly 50 years and received great satisfaction seeing the confidence and enjoyment that dancing brought to his students. Ed’s two great passions in life were dancing and his two children, Matthew and Ashley. His daughter has a stable, successful job in the medical profession and his son is a pastor of an Independent Bible Believeing Baptist church. Religion was always a point of contention between Ed (who was raised Catholic) and his son, but a very signifigant thing happened about 5 years ago. He was visited by an old dance friend named Joe G____ who had become a born again Christian. After spending some time with Ed and explaining to him that religion cannot save, but Jesus does; that salvation is a free gift and is not earned by good works, Ed decided to bend his knee and put his trust in Jesus Christ’s death, burial and ressurrection for salvation, rather than his own Catholic religion. According to the word of God, the Holy Bible, dad’s soul was born again that day and he is now rejoicing in the presence of God in Heaven. “For whosoever shall call upon the name of the Lord shall be saved” Romans 10:13 “Believe on the Lord Jesus Christ, and thou shalt be saved” Acts 16:31 “For by grace are ye saved through faith, and that not of yourselves. It is the gift of God. Not of works lest any man should boast” Ephesians 2:8-9 Ed was a wonderful, generous and loving man who could always make you laugh. He is greatly loved and will be greatly missed. Written by Ed Crane’s son, Matthew Crane

Edward Francis Crane 1942 - 2018 Edward Francis Crane passed away on the evening of June 9th, 2018, at age 75. He is survived by his two children, Matthew Crane and Ashley Rad. Edward was born in Boston, Massachusets. He spent most of his... View Obituary & Service Information

The family of Edward F. Crane created this Life Tributes page to make it easy to share your memories.