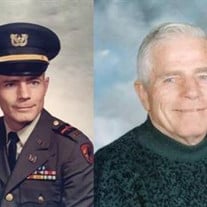 Edward Orson Dayley, Major, US Army (Retired) Our Hero 1941-2015 Edward Orson Dayley died peacefully with his wife, Beth Dayley, and all five of his children around him on Thursday, January 8, 2015 of natural causes. Ed was born to Carroll Bates Dayley and Emma Nelson, in Twin Falls, Idaho, on April 4, 1941. He grew up in Burley, Idaho, and served an LDS Mission to the West Central States Mission from 1960 to 1962. He attended Utah State University and University of Utah (of which he was a devoted fan), and graduated from the University of Nebraska. Ed was a real hero to many people in his life, not only because of the many medals he won in Vietnam, including the Silver Star, and the Distinguished Flying Cross, but also because of the generous, loving, helping hand he gave to many people. He loved people, and was a wonderful leader, whether it was the army troops he trained throughout the world, the grandchildren he taught to fish at Island Park, Idaho, the children he always supported in their activities, the young men who he coached in basketball in the ward, the primary children he taught or the friends and neighbors he always helped. Ed’s greatest accomplishment was that of a father. He was patient with his children. He showed them he respected his wife as their mother and as his eternal companion. He attended all kinds of events and volunteered in things to support his family. He is a big friendly tease to all in the best way. He has a kind heart and accepts without judgment everyone he knows. He married Mary Beth Hansen in the Logan Temple on November 27, 1963, and they had over 51 happy years together. They are the proud parents of Marlowe James Dayley (Kristen Smith Dayley), Issaquah, Washington; Athena Lee (Dirk) VanderMeyden, Layton, Utah; Marc Edward (Lisa Bench) Dayley, Murfreesboro, Tennessee; Diana Lyn (Jason) Bowler, Hinsdale, Illinois; Bryan Mikele Dayley, Centerville, Utah; 15 grandchildren and two great-grandchildren. Ed served his country as an officer in the United States Army, and retired as a Major. He served two tours of Vietnam as an Army Aviator (helicopter pilot), and also was an Air Defense Officer until the Army created the Army Aviation Division of which he became a part. In addition to Vietnam, he served all over the United States, including the big island of Hawaii, and Vicenza, Italy. After he retired from the Army, he lived in Sacramento, California before he and his family came to Centerville, Utah to live in 1990. In Centerville, he taught computers at Centerville Elementary School for six years, then was a School Technology Specialist for Davis County Schools for 10 years, working at Bountiful Elementary School and Millcreek Junior High School. Ed was an active member of the Church of Jesus Christ of Latter-day Saints, and enjoyed serving in many callings. He loved coin collecting, rooting for the University of Utah, fishing with his family at Island Park, Idaho, all sports, supporting his family in all their activities, music and live theater. In addition to his wife and children, he is survived by his five siblings, Fred (Vivian) Dayley, Burley, Idaho; Emily June (Duane) Vickery, Emmett, Idaho; Linda (Mike) Donner, Republic, Washington; Marie (Bill) Martindale, Meridian, Idaho; Carl (Maria) Dayley, Burley, Idaho. He is preceded in death by his parents, Carroll and Emma Dayley, three grandchildren, Andrew, Trevor, and Josephine Dayley. A special thanks to all the wonderful doctors, nurses, therapists and everyone at Cedar Sinai Hospital in Los Angeles where Ed received his lung transplant nearly five years ago, and for the wonderful years this gave him. The family appreciates all those who donate their organs to provide life and living for those who need it. Funeral services will be held at 11:00 a.m. on Tuesday, January 13, 2015 at Parrish Canyon Ward, 610 N Rowland Way, Centerville, Utah 84014, where friends can visit from Monday evening from 6:00 to 8:00 p.m. and Tuesday from 9:30 – 10:45 a.m. prior to the service. Interment at Centerville Cemetery.

Edward Orson Dayley, Major, US Army (Retired) Our Hero 1941-2015 Edward Orson Dayley died peacefully with his wife, Beth Dayley, and all five of his children around him on Thursday, January 8, 2015 of natural causes. Ed was born to Carroll... View Obituary & Service Information

The family of Edward Orson Dayley created this Life Tributes page to make it easy to share your memories.