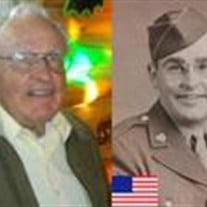 On June 29, 2012 the gates of heaven opened gleefully cheering “Ed’s here, Ed’s here!” They are having a grand party in Heaven welcoming Ed home. Ed hung on as long as possible for his beloved wife Fran & his family. He’s survived by his wife, four sons, Tim, Erik, Todd, and Aaron and Fran’s children and grandchildren. He has more family, friends, & those who have only met him once, than can be listed. His beloved wife, Fran, sat by his side as he peacefully slipped back to his Heavenly Father, parents, & siblings. He was a devoted member of the LDS faith & was ready for the day he would be reunited with them and our Lord and Savior Jesus Christ. He held dear to his heart his students, co-workers, and staff at the University of Utah. Ed was very proud of his military service in the Philippines & Japan. He served brave and proud as he helped clean up the aftermath of WWII in Japan. He grew to love the Japanese people dearly. There’s not a soul who met Ed who didn’t love him. He was genuine, loving, fun, & light hearted. As they welcome him in Heaven he will be dearly missed & fondly remembered here. A viewing will be held at the LDS Chapel 220 E 8670 S Sandy, UT on Tuesday July 3, 2012 from 9am-11am. The funeral service will begin at 11am. Following the funeral, graveside services will be at the Providence Cemetery in Logan, UT.

The family of Edward Peter Hansen created this Life Tributes page to make it easy to share your memories.