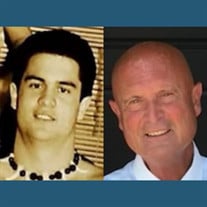 Edward Kalehua Malie (Kaiaokamalie) born April 13, 1944, in Honolulu, Hawaii, and peacefully passed away April 30, 2022. He had an amazing childhood growing up on Ulupalakua Ranch on the island of Maui. He had always been a person of faith. His family was Catholic and he was an altar boy. At 16, the missionaries visited his home and he along with his Mom, brother and sisters were baptized into the Church of Jesus Christ of Latter Day Saints. During his teens his family moved to the mainland, California. With them came the family entertainment group, Eddie and His Islanders. Ed was a master at the fire knife dance. He would perform even after the family stopped doing shows for various events and for his children's school. He attended San Lorenzo High School. At 21 he answered the call of the Lord and served 2 ½ years in the islands of Tonga. He had a grass shack for a home but most nights were spent sleeping under the stars and catching rides with fishermen from island to island during the day. It was truly the best time of his life. His mission was honorable and he was instrumental in over 3000 baptisms. His most precious baptism was later in life when he was able to baptize his own father. The truth is he never left that Tongan mission in his mind. He continued speaking the language fluently, taught at the Missionary Training Center in Provo, UT and served many many positions in the church on all levels to further spread the Gospel. After his mission he entered the United States Navy and served for 2 years. He loved traveling the world and the Mediterranean was his favorite destination. He married Barbara Venturi in 1971 and together they raised 4 children in Utah. Ohana was always important to him and he spent many hours doing genealogy work tracing back many generations and making sure they were in the records at the Genealogy Library based in Salt Lake City. Ed was always a learner. He studied Weight Lifting, Reflexology, Meditation, Kung Fu and Church history.He loved being outside. After careers as a UPS driver, real estate agent, and school custodian; he became an entrepreneur full time and opened up a landscaping company in St. George, UT. This passion served him for many years until his retirement. Later in life he married Sharon and his family grew by 4 adult children. After she passed, he wedded Nolini Lopeti and his family expanded by another 8 adult children. Edward is survived by his 4 children, Rebekah(Jess), Jacob (Michelle), Rachel (Rob), and Alexander. Also, 12 more adult children, 42 grandchildren and 9.5 great grandchildren. A traditional Tongan ceremony will be held Friday, May 6, 2022 from 10 am to 12:00 pm. A formal LDS service then follows at 1:00 pm. Both services will be held at the Timpview 1st Ward, 1050 North 600 West Orem, Utah. Graveside dedication will be Wednesday, May 11 at 11:00 am at Orem City Cemetery.

Edward Kalehua Malie (Kaiaokamalie) born April 13, 1944, in Honolulu, Hawaii, and peacefully passed away April 30, 2022. He had an amazing childhood growing up on Ulupalakua Ranch on the island of Maui. He had always been a person of faith.... View Obituary & Service Information

The family of Edward Kalehua Malie Jr created this Life Tributes page to make it easy to share your memories.