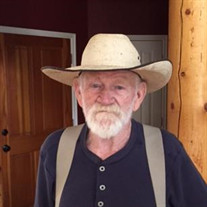 Edwin Lee Smith of Salt Lake City, Utah died Monday, October 9th in a fatal rollover near St. George, Utah. He was born in Echo, Utah on August 3rd, 1936 to parents Edward and Lillian (Richins) Smith, and married Joan (Williams) Smith on June 5th, 1960. Edwin served his country in the Korean War from October 1954 until July 1956. He graduated from the University of Utah, and before finishing his career with Hercules as an Aerospace and Materials Engineer, he played a critical role in building the Model 76 Voyager aircraft that was the first to fly around the world without stopping or refueling. He then went on to be a successful Adjunct Professor at Utah State University. Edwin was an avid outdoorsman who loved, hunting, fishing, camping, canoeing, and motorcycling, and driving around in his dune buggy with his family, and passed that same love for the outdoors on to his children. Edwin is survived by his wife, Joan Smith, son Gregory and Kathy (Paris) Smith, and daughters Christy Smith and Jennifer Smith, his brother Larry Smith his sister Barbara Lake of Farmington, Utah. He is also survived by four grandchildren, three step-grandchildren, and three great grandchildren. A graveside service will be held at 11:00 on Monday, October 16th at the Farmington, Utah.

The family of Edwin Lee SMith created this Life Tributes page to make it easy to share your memories.