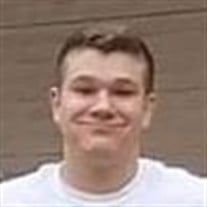 EJ (Eric Earl Jack) Blackham Jr. returned home to Heavenly Father on Monday, October 7, 2019. He is survived by his mother Kimberly Harter, father Eric (Becky) Blackham, 6 sisters Brittany (Chandan), Shaelie (Braden), Marissa, Shannon, Jerilynn, and Joleigh, a brother Denim, and girlfriend Kaylee Scott. EJ’s joy and love was teasing his siblings. He showed his love through teasing. Often, he took it too far and they thought he was bullying them. He thoroughly loved, cared for, and worried about his mother. He loved being with his dad: shooting, hunting, hiking, riding, driving, building, or just sitting around. He played with his dog, Jinx, and loved taking it with him. And, yes, he would even tease it. If it was outdoors he loved it. If it moved on his own power he would want to make it faster and work on it. He was going to join the Marines on Tuesday the 15th of October. He had been training and working out with them for a year. He was anxious and beyond ready to go in. EJ lit up the room as soon as he walked in. One look at his mischievous grin and you were smiling too, (before the teasing started) a gift he has shared with us since he was a little boy. He was the light of his youngest sisters’ eyes. His prized possession was REX a blue dinosaur 1975 Ford Highboy that he got from his dad and uncle. He was often working on it and picking up pieces of the truck off of the road. He would blame it falling apart, not on the age of the truck, but on how his dad had jimmy-rigged it 15 years ago. He never had to text his friends to let them know he was there, they could hear him coming ten blocks away. He will be greatly missed by all who knew and loved him.

The family of EJ Blackham created this Life Tributes page to make it easy to share your memories.