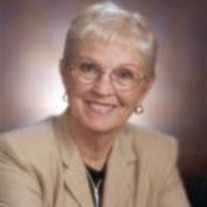 Elaine Taylor Stratford, beloved wife, mother, grandmother and great-grandmother died September 27, 2010 in Provo. She was born January 31, 1929 in Los Angeles, California to Orson and Hazel Anderson Taylor. Elaine’s high energy and enthusiasm were contagious whether she was at work with Osmond Realty, teaching, carrying out church callings, or working on one of her many projects. She met her husband when they were both students at Stanford University. She served a mission for the LDS church in Eastern Canada and then was married to Lowell J. Stratford on February 7, 1953 in Switzerland by his mission president just 34 hours after Lowell was released. Elaine taught guitar for over 40 years and her music has influenced people all over the world. Her children and grandchildren have been blessed by her knitting and crocheting talents with hats, scarves, blankets and sweaters. She is survived by her husband, Lowell, children Timothy P Stratford (Robin), David L Stratford (Jill), Robin Gunnell (Steve), Jaime Holmes (Robert), Daniel O Stratford (Sue), 19 grandchildren and 6 great-grandchildren. Elaine will be greatly missed and remembered fondly until we are reunited as a family. A memorial service held Friday, October 1, 2010 at 4:00 p.m. at the Foothill Ward building, 345 E. 4525 N., Provo, 84604. Visitation with the family one hour before. Interment at Mountain View Cemetery, Pocatello, Idaho.

The family of Elaine Taylor Stratford created this Life Tributes page to make it easy to share your memories.