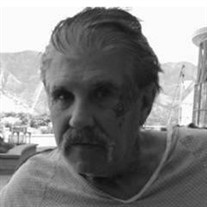 Eldred Dale Luck Born: December 12, 1941 – Salt Lake City, Utah Died: December 30, 2015 –Tooele, Utah Our very unique, sweet spirited, Harley riding, father, grandfather, and great grandfather left his earthly body while surrounded by his family on December 30, 2015, and returned home to his Heavenly Father. His final years were riddled with challenges, and the word “endurance” would be the most accurate way to describe the latter years of his life. From a weak heart that proved to be a challenge he learned to live with, to his most recent battle with pancreatic cancer in which he succumb to with great positivity and strength. Though never despondent, rarely complained, and rarely acknowledging his pain, he always hoped that his health would return so that he could take another ride on his Harley into the wind of the West Desert. Dale attended Granite High School, where he was known as the “Fonz”, as he closely resembled the fictional character on the TV show “Happy Days”. Dale possessed a lovely natural talent for the alto saxophone and the clarinet, and shared it as part of a band that played on the weekends at different venues. At the age of 18, Dale married Kathryn Wilson, and spent thirty-one years together building a family, and supporting them as a heavy duty diesel mechanic. Together, Dale and Kathryn had nine children: Greg Luck, Kristin (Luck) Conner, Derrick Luck (died at 3 days old), Angela (Luck) Cucchiaria, Jayne (Luck) Erickson, Clark Luck, Kimberly (Luck) Richardson, Melissa Luck (Twin to Kimberly died at one day old) and Katie (Luck) Stell. Dale and Kathryn later divorced, and Dale re-married and later divorcedMelodie Hansen, together they shared a Baby Boy (died at birth), and Cameren Luck. Aside from Dale’s children, his posterity also includes twenty-three grandchildren and six great grandchildren. Dale is proceeded in death by his father, Eldred Hyrum Luck, Lillian Rankin, two sisters, Marilyn (Luck) McEwan, and Darlene (Luck) Pipken, as well as his daughter Kristin (Luck) Conner. He is survived by two sisters, June (Luck) Page, and Cheryl (Luck) Reid. Dale loved so many simple things in life. He enjoyed visiting the Pawn Shop and looking for tools, guns and gadgets. He loved meatloaf, mashed potatoes,and old re-runs of Gun-Smoke which he played over and over 24 hours a day. Most of all, he cherished visits from his children and grandchildren, and hoped it would never end.“I sure Love you”he would say the whole time during the visit. Dale loved his dear friends Gary Steadman, Bishop Beers, Bishop Roberts, and Stake President Obacka for the love, concern, and support they gave. This support directed Dale on a new path as he began turning his life around. He also loved the good people in his Tooele Ward, where he loved passing the sacrament on Sunday mornings. He enjoyed time with his Home Teaching Companion, Don, as well as his doctor Hillary Seibert, as wells those at the Huntsman Center who would hug and kiss him at every visit. Above all, Dale looked forward to seeing his dear father again, who through this journey had been his guardian angel. The memorial service will be held 12:00 Noon, Saturday, January 9, 2015 at the LDS Chapel located at 253 South 200 East, Tooele, Utah. A private burial took place at Elysian Burial Gardens in Salt Lake City, Utah.

The family of Eldred Dale Luck created this Life Tributes page to make it easy to share your memories.