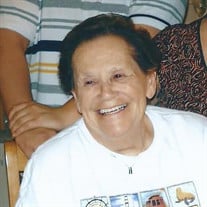 Eleanor June Donohoo Johnson, 87, passed away peacefully on July 21, 2017. June was born June 13, 1930 in Sandy Utah to William R. Donohoo and Eleanor G. Mickelson. As a child, Mom grew up in Sandy, they later moved to Clearfield where she graduated from Davis High School. Mom’s first job was an usher at the Admiral theater in Clearfield. She served in the USAF from 1949 to 1951. She married Jerome R. Johnson in Roswell New Mexico and they later divorced. Mom never remarried. Mom worked at the Officers Club at Hill Airforce Base as the cashier supervisor, but performed many other duties at the Club. She retired from the Officers Club after 35 years, had a brief retirement and went back to work at the Base restaurant as their central fund cashier, payroll and accounting technician. She was forced to quit working at the age of 80. Mom was an avid sports fan. She loved the Denver Broncos, Utah Jazz and the University of Utah Utes. In her recent years, she acquired the love of the left hand only turns of Nascar. She enjoyed reading, word search puzzles, and Sunday drives to places she wanted to go. She enjoyed meeting up with her extended family and good friends the Perkins and Johnsons on Saturdays at Bee’s Café in Roy . June leaves behind her three children, Steven W. (Sandy) Johnson of Clearfield, Kay Sarazin of Roy, Julia (Jerry) Harrison of Syracuse, her grandchildren, Steven A. Johnson, Jason L. Johnson, Christopher J. (Robyn) Johnson, Ryan A. (Bobbi) Johnson, Kirk Sarazin, Nicole Harrison, Gerrard Harrison, Ashley Harrison. Her great grandchildren, Zachary (Sabrina) Plato, Gavin Johnson, Shaylee Johnson, Steven R. Johnson, Sylus, Tucker and Landon Johnson and Amaya Harrison. Her great-great-grandchild Eliana Plato. Many nieces and nephews from Utah, Colorado, Oklahoma, Georgia and New York, and her little dog and furbaby, Delilah. Mom was preceded in death by her parents and 5 brothers, Carl, Bob, Dale, Neil and Bill Donohoo. The family wishes to thank Thatcher Brook rehabilitation center staff for taking such good care of mom while she was recovering. We would also like to thank Davis Hospital and the 3rd floor staff for treating her with compassion during a difficult time. As per mom’s request, there will be no funeral services. Condolences may be left on the Premier Funeral Services website.

Eleanor June Donohoo Johnson, 87, passed away peacefully on July 21, 2017. June was born June 13, 1930 in Sandy Utah to William R. Donohoo and Eleanor G. Mickelson. As a child, Mom grew up in Sandy, they later moved to Clearfield where she graduated... View Obituary & Service Information

The family of Eleanor June Johnson created this Life Tributes page to make it easy to share your memories.