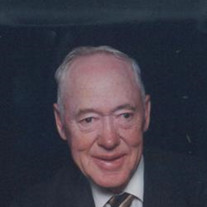 Our loving husband, father, grandfather, brother and friend, Elgie Wilson, 93, passed away peacefully at home on March 19, 2014. He was born third of five children born to Myra Heward Unthank and George Gamiliel Wilson on August 29, 1920 in Malad, Idaho. He grew up on a farm and graduated from Malad High School. His employment began at an early age working on farms in the Pocatello Valley and culminated with his retirement from Hill Air Force Base after 32 years. He proudly served in the US Army during WWII. He married Lola Brauer on April 27, 1942 in Hawthorne, California. It was solemnized in the Salt Lake Temple on May 6, 1943. They moved to Roy, Utah where Elgie built their home and farmed his twenty-one acres. Following his retirement, he and Lola lived in Roy in the summer and in their second home in Quartzsite, Arizona during the winter. He served in many positions in the Church of Jesus Christ of Latter-day Saints, but especially loved the years he served as scoutmaster helping boys become men. Elgie loved his family, his country, the out-of-doors, boating, hunting, fishing, riding horses, camping, dancing, traveling, making friends. having watermelon busts and serving others. He taught his children to revere God and country, to “Pull weeds with both hands” and to “Honor their word.” Elgie is survived by his wife of 72 years: daughter, LaNae Simmons (Glen), son, Leon Wilson (Diane), daughter Lola Delene Butler (Keith), and son-in-law Larry Thompson. He is also survived by a brother: George G. Wilson of Ogden, a sister, Melva Moser of Oregon, 14 amazing grandchildren, 31 great-grandchildren and many nieces and nephews. He was preceded in death by his daughter Sharon Thompson, and three grandchildren. Funeral services will be held Saturday, March 29, 2014 at 11 am in the Roy 12th Ward located at 4524 S 2525 W in Roy, Utah. A viewing will be held prior to the service from 9 to 10:30 am at the Roy 12th Ward. Internment will be at Leavitt Cemetery located at 836 36th Street Ogden, Utah 84403. The family wishes to express their deep gratitude to the staff of HCNU and those special friends who gave kind and loving care to our Husband, Father and Grandfather.

Our loving husband, father, grandfather, brother and friend, Elgie Wilson, 93, passed away peacefully at home on March 19, 2014. He was born third of five children born to Myra Heward Unthank and George Gamiliel Wilson on August 29, 1920 in... View Obituary & Service Information

The family of Elgie Wilson created this Life Tributes page to make it easy to share your memories.