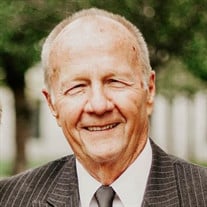 Elgin Bradley Williams passed away June 20, 2021 in his sleep following complications of a head injury. He was born in Salt Lake City on June 19, 1943 to Elva Morene Hudson and George Bradley Williams. He was the middle child of six and enjoyed a wonderful childhood. He graduated from Highland High School in 1961 and went on to graduate from Utah State University in 1970 after serving a two year LDS mission in the North Central States Mission. Elgin served in the Air National Guard including active duty on Naval Station Treasure Island. He married his sweetheart, Joan Heiner, on June 30, 1967 in the Salt Lake LDS temple. Elgin was a loving father of three daughters, a role in which he delighted in. His family was his pride and joy. He loved gathering together with them often and always went all out for his annual family Halloween party, Easter Egg Hunt and Christmas. Young or old, the grandchildren look forward to these holiday events. Elgin worked hard at providing for his family. For many years he worked in real estate investment, but he was also an entrepreneur. He owned a women’s clothing store and a Chevron gas station. Whether at work or home, he would never give up until a task was completed. Elgin loved life. He enjoyed camping, skiing, boating, golf, working in the yard, playing cards, watching movies with popcorn and spending time at the family cabin. Everyone loved being around him. He had a great smile and an infectious laugh. He loved a funny story or joke. He was such a kind and thoughtful man and was easily brought to tears with his tender, compassionate heart. Elgin was an active member of The Church of Jesus Christ of Latter Day Saints. He served faithfully in many callings including High Priest Group Leader, counselor in a Bishopric and a two year service mission with his wife, Joan, in Kearns, Utah. He spent his life helping and serving others. He was extremely loyal and would always be there for anyone when needed. Many have been touched by his genuine concern and interest in their lives. We rejoice in the knowledge of the Resurrection and look forward to a glorious reunion with him. Elgin was preceded in death by his beloved wife Joan, parents, Brad and Morene, brother Phillip (Sherry) Williams, and grandson Chandler. He is survived by his three daughters: Stacy (Jim) Cassell, Andrea (Scott) Thompson, Molly (Adrian) Porter, nine grandchildren and three great-grandchildren. He is also survived by his brother Dee (Dionne) Williams, and his sisters Susan (Michael) Hatch, Rosemary (Brad) Frost and Rebecca Duncan. Funeral Services will be held on Thursday, July 1st at 1:00 pm at the Wasatch Stake Center, 8170 S. Short Hills Dr. Cottonwood Heights, UT. A viewing will be held on Wednesday, June 30th from 6-8 pm and Thursday, July 1st from 11:30-12:30 at the same location.

Elgin Bradley Williams passed away June 20, 2021 in his sleep following complications of a head injury. He was born in Salt Lake City on June 19, 1943 to Elva Morene Hudson and George Bradley Williams. He was the middle child of six and enjoyed... View Obituary & Service Information

The family of Elgin Bradley Williams created this Life Tributes page to make it easy to share your memories.