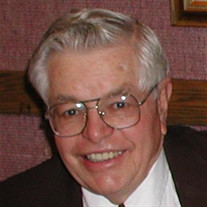 Ellis Donald Harris Sr., 89, our wonderful father, grandfather, friend, and example, left this earth to join our mother in the eternities March 22, 2017. He knew the Lord. He served Him faithfully all his life, leaving an example for generations to come. Ellis was born in Monarch, Utah, the 2nd of seven children born to Lester and Sadonna Clark Harris. He spent most of youth in Sandy, UT, graduating from Jordan High School. In 1944 he was one of two men in the Utah area to pass the Eddy test, which qualified him for the rigorous Navy Electronics Training program. Following his military service, he finished his degree in Electrical Engineering at the University of Utah. An exceptional student and scientist, he began his career at the Naval Research Laboratory in Washington, D. C., where he was honored with the Outstanding Young Scientist Award. During this time, he met our beautiful mother, Cathryn LaVerne Clark. They were sealed in the Salt Lake Temple February 24, 1954. Their marriage was blessed with 12 children, their posterity now includes 40 grandchildren and 50 great grandchildren. Ellis was a brilliant and passionate optical engineer. While working for Xerox, he was awarded many patents for circuitry and lens design. One of his greatest accomplishments was designing the optics that made one-pass, full-color laser printing possible. Ellis was a gospel scholar and a spiritual giant. The scriptures were his friends, and he could easily find one to fit any situation. He could and often did, teach a thorough lesson on ANY gospel topic at any time, with no advance preparation. He didn't get a chance to serve a mission as a young man, so he eagerly awaited the time when he could serve as an adult, which he did with Cathryn in upstate New York. Having no opportunity for Boy Scouting in his youth, he became an outstanding scoutmaster, and is remembered for his engineering skill designing and building towers, rope bridges, and canoes. Former scouts also recall his kindness, tolerance, and patience. His greatest accomplishments, though, were at home. His songs, stories, jokes, and “Dad-isms” are fondly recalled and passed down. Gospel discussions were as frequent and natural as any other topic. He was a do-it-yourselfer and would often have parts left over after he fixed something. He would simply say it was “over engineered.” He is rejoicing in the fruits of his life with our mother, and his greatest wish was that his posterity would follow their example and make the Savior and His gospel the center of their lives. Ellis is survived by his brothers Calvin, Delmar, and James, his children Don (Jan) Harris, Gayle (Scott) Stratford, David (Jolene) Harris, Steven (Wendy) Harris, Caroline, Lisa (Bruce) Armstrong, Linda (Darin) Muncy, Jon, Bill, Cindy (Mark) Congdon, Marc (Heather) Harris, and Robert. He is preceded in death by his parents, his sisters JoAnn and Darlene, his brother Eldon, and his grandson William. Funeral Services will be at 11:00 a.m. on Saturday, April 8, 2017 at the Riverview 1st Ward building located at 10124 South 1300 West, South Jordan, UT. Viewing will be from 9:30 a.m. to 10:45 a.m. prior to the services. Interment will follow at the Larkin Sunset Gardens in Sandy.

Ellis Donald Harris Sr., 89, our wonderful father, grandfather, friend, and example, left this earth to join our mother in the eternities March 22, 2017. He knew the Lord. He served Him faithfully all his life, leaving an example for generations... View Obituary & Service Information

The family of Ellis Donald Harris Sr created this Life Tributes page to make it easy to share your memories.