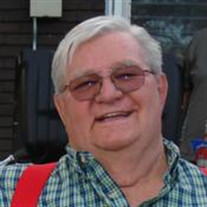 EJ Van Wagoner (Elmo J Van Wagoner, July 7, 1931 – August 5, 2013) Our beloved Husband, Father, Grandfather, and Friend is now fishing with the Great Fisher of Men. He reunited with family and friends in Heaven August 5, 2013. Those closest to him will remember him for his warm heart, big hugs, witty sense of humor, little ditties and songs, and fishing lessons. He loved well and was well loved. He was born to Dean Delos Van Wagoner and Alta Elizabeth Johnson in Provo, Utah, the fourth of seven children. He graduated in 1949 from South High School in Salt Lake City. He joined the US Navy serving on the USS Colonial during the Korean War. On November 18, 1952, he married Audrey Arlene Monroe while home on leave; in 1954 their marriage was solemnized in the Salt Lake Temple. They celebrated their 60th anniversary last November. Together they created six wonderful children. As a member of The Church of Jesus Christ of Latter-Day Saints, EJ served in many callings and especially loved the scouting program. He wanted most for his posterity to know of his love for them and of his testimony of Jesus Christ, having a great hope that they will follow in the Savior’s footsteps. EJ was very industrious: working on the docks, working in a bakery, delivering milk, working for Morrison-Knudsen as a large equipment operator. He also owned and operated Utah Retinners, eventually making his career selling insurance, for New York Life and Texas Life. He was an avid outdoorsman enjoying fishing, hunting, and camping. He was a master organic gardener and a voracious reader. He often gathered family and friends together to enjoy his down home cooking, great conversations and spirited game playing. He is survived by his wife Audrey; children Kerry (Scott) Daley, Dirk (Kathryn) Van Wagoner, Carmen (Jerry) Corts, Barbara Van Jones, Eric (Steve Gineagar) Van Wagoner, Jolene (Edward) Drolet, 23 grandchildren, 6 great grandchildren; siblings Brent (Reit) Van Wagoner, Gae Van Wagoner, and Leon Van Wagoner; and many cherished nephews and nieces. He was preceded in death by his parents, siblings and their spouses Arlene (Clent) Crabtree, LaDene (Bill) Martin and Bryce (June) Van Wagoner. The family is especially grateful to the wonderful caregivers at the George E. Wahlen Ogden Veterans Home for their loving care to EJ and his family. A memorial service will be held Saturday, August 10, 2013, at 2:00 p.m. at the Wahlen Veterans Home, 1102 North 1200 West, Ogden. Internment will follow at the Midway City Cemetery.

The family of Elmo J Van Wagoner created this Life Tributes page to make it easy to share your memories.