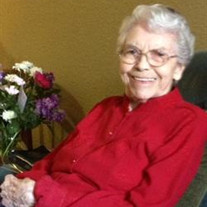 Our mother, grandmother, sister and sweet friend, Enid Massey Anderson, passed away peacefully on March 11, 2014 after saying her “I love-you’s” and “thank-you’s” to her children and many of her grandchildren. She had suffered with debilitating rheumatoid arthritis for more than 15 years, and a recent fall ultimately proved too much for her to bear.   Born August 22, 1923 to John Norval Massey and Gladys Britt, in Vernal, Utah, Enid’s early years were spent in Maeser as the fifth of ten children who grew up on a small family farm and was the first of the children to graduate high school. She later joined the Navy where she and three brothers in the Army served their country during World War II. She returned home when the war ended, and soon met another Navy returnee, Merrill Reynolds Anderson, who lived just down the street a couple of miles. After a whirlwind romance, they were married in the Salt Lake City LDS temple. Enid bore the couple four children within 5 years, Bradley, Merrilyn, Rudy Fred and Sterling Clyde.   Enid was the consummate homemaker, her greatest joy in life. Her enormous capacity to love encircled not just her family but friends of her children and anyone who entered her home, which usually smelled of fresh baked bread and something cooking in the skillet. As the wife of a Bishop, Stake Patriarch and Stake President, she found herself cooking meals for people from all walks of life, including indigent street urchins and LDS General Authorities. She was exceptionally skilled at making venison or elk taste like the finest beef steaks anywhere. She also loved gardening and always had beautiful flowers and vegetable gardens wherever she lived. When her rheumatoid arthritis took away her ability to lift a pan or hold a rake, it was her saddest day, realizing she could no longer cook or provide fresh vegetables to her friends and loved ones.   Enid, Merrill and their children lived much of their early lives (from 1950 to 1963) in Rangely, Colorado, where Merrill worked for the Chevron Oil Company. They served diligently with typical vigor in the Rangely Ward before Merrill was transferred to LaBarge, Wyoming. Merrill was Bishop of both the Rangely Ward and the LaBarge Ward, and Enid served in nearly every position within the Church, primarily as a Seminary Teacher for more than a decade. After the children graduated high school, Enid and Merrill moved to Kemmerer, Wyoming where Merrill served as Stake President for 10 years, and where they delivered mail to rural routes in that part of the state.   Enid loved music and made her home a place where music of all kinds was enjoyed. Occasionally she would even surprise her close friends, family and grandchildren by pulling out her beloved harmonica and playing a tune with gusto and flair. Her sense of humor and her refusal to believe that any person was better than another endeared her especially to young people who found her accepting nature refreshing and comfortable. Her quickness to laugh and to both make and enjoy the humor of life is what we will miss most of all. Well, and her cookies.   In 1985 Merrill and Enid served a mission to Peoria, Illinois, returning in 1987, after which they made their home in Orem, Utah where both lived the remainder of their lives.   Enid is survived by her four children, Bradley (Olivia) Anderson of Sparks, Nevada; Merrilyn (Mike) Lynch of Smithfield, UT; Rudy (Karen) Anderson of Salem, UT; and Sterling Anderson of Orem, UT and by sisters Reyma Horrocks of Vernal, UT and Sybil Webb of Salt Lake City. Enid was blessed with 26 grandchildren who will miss her enormously as well as 53 great-grandchildren. She was preceded in death by her adoring husband, Merrill, after 66 years of marriage, as well as her siblings, Eula, Norval (Bun), Garth, Johnny, Leah, Markel and Laurel. Her grandchildren, Shawna Lynch Neilsen, and Robert Sterling Anderson and great-grandchild, Stella Pearl Adair also precede her in death.   Heaven just got brighter, happier and more joyful with a new angel among them. Thank you, Mom, Sis, Grandma, for all you taught us – to live life with joy, to forgive completely, and to serve with love. We love you dearly, and thank you for a life so beautifully lived.   Services will be held at the Geneva Heights 5th Ward located at 546 N 500 W. in Orem, UT on Saturday, March 15, 2014 at 1:00 pm. Viewing at the church will be Friday, March 14th from 6:00 to 8:00 pm and on Saturday before the service from 11:30 am to 12:45 pm . Enid will be buried at the Orem Cemetery - 1520 N 800 E, Orem, UT following the funeral services.

The family of Enid Massey Anderson created this Life Tributes page to make it easy to share your memories.