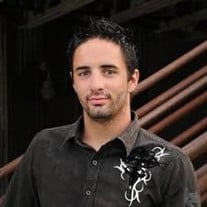 Eric Ray Lowe 1987-2014 The Man, The Myth, The Legend! Eric passed away in American Fork, Utah, surrounded by loved ones, on June 5, 2014. He was born to Earl Ray & Tamara K. Lowe in American Fork, Utah on April 11, 1987. A lover of life, beauty and risk-taking, Eric pursued all of his interests; working as a firefighter, mechanic and EMT for many years. Eric was a prodigy of both his grandfather's works by serving others. One of his great accomplishments was reviving Dens Automotive, which was started by his great grandfather, Denzel Arthur Turner. Eric was a master craftsman who had every tool to fix any problem, even if he had to make it himself. He had a thirst for life that was never quenched. He loved adventure! Life was not complete without sinking his Jeep at least once a year! He was a thrill seeker who had an extraordinary eye for photography, taking his camera snowboarding, off-roading, hiking, biking, boating, climbing, jeeping, golfing and coffee drinking. Keep on, keeping on was his motto of unending positivity...which he used over the last few years to defeat many personal, mental and physical challenges! Eric was like a magnet, drawing others to him with his charm, looks and quick wit. Eric valued family above all else, yet his compassion and caring extended to friends and strangers alike, never hesitating to extend a hand of help. The phone book is not big enough to list all the connections and people he helped. He performed search and rescue and volunteered with Katrina efforts. Eric is survived by his parents, fiancé, Dana Hunerjager, his biological son, Easton and his constant canine companion, Kiara. Sisters and brothers; Jessica French (Brian) Andersen, Alesha (Sebastian) Hoover, Elden Ryan (Macala) Lowe, Grandparents; Geraldean Lowe, David and Carla Turner, many nieces, nephews, aunts, uncles, cousins and friends. Viewing will be on Sunday, June 8, 2014 from 6:00 to 8:00 p.m. at the Cedar Hollow Stake Center located at 2178 North 1200 East in Lehi. Funeral Services will be on Monday, June 9, 2014 at 11:00 a.m. at the church with a viewing one hour prior to the services. Burial will follow the services at the Lehi City Cemetery.

The family of Eric Ray Lowe created this Life Tributes page to make it easy to share your memories.