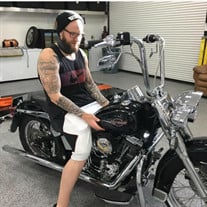 Eric Thomas Morgan, age 35, died April 18, 2021, in Salt Lake City, Utah from injuries sustained in a motorcycle accident. Eric was born July 9, 1985, in South Lake Tahoe, California to Ken and Tracey Morgan and his older brother David, at Barton Hospital. Eric was born and raised in South Lake Tahoe, California & Minden, Nevada. He and his siblings enjoyed skiing, snowboarding and summers boating surrounded by the beauty of Lake Tahoe. Eric attended both Douglas High and SouthTahoe High School. Eric joined The Other Side Academy in Salt Lake City, Utah. While there, he was trusted with many leadership positions, including tribe aid, tribe leader, training crew boss and crew boss. He was especially influential in helping establish The Other Side Movers as the number-one rated moving company in the State. He took great pride in holding the crews to the highest standards and led by example with a monster work ethic. But what Eric is beloved most for at TOSA is the tireless way he loved, counseled, and vigorously mentored his fellow students. Scores of students and graduates have grown to be better people because of Eric. Eric started a new career as a heavy-haul truck driver in 2020. He was passionate about his work and enjoyed the challenges it brought. He frequently did work at Rio Tinto Kennecott Copper Mine and was a well-respected colleague. He was dedicated to his craft and enjoyed learning from those around him. "Eric’s the most amazing man I know. The love we shared was rare & real. We were excited to start a life filled with beautiful dreams and a beautiful family." ~ Heather Eric was dedicated and devoted to his health and the gym. He was extremely motivated to reach his physical and emotional aspirations. Survived by: Ken & Sheri Morgan - Dad & Stepmom - Carson City, NV Tracey & Pat Milsop - Mom & Stepdad - Salton City, CA Heather Dore - Fiance’ & her daughter Brooklyn, SLC, UT David Morgan - Brother, Salton City, CA Maegen Powers - Stepsister - Kissimmee, FL Kevin Milsop - Stepbrother - Hunker, PA Tiffany & Phil Morelli - Stepsister & Husband - Minden, NV Gerred & Shannon Hudder - Stepbrother & Wife - Carson City, NV Preceded in death by Papa Harold Morgan whom Eric loved and adored and both his Grandmothers Nancy Morgan and Dixie Malone. Services will be held 11:00 a.m. Saturday, May 8, 2021, at the Church of Jesus Christ of Latter-day Saints Chapel at 2633 South 50 West, Bountiful, UT (just east of Orchard Drive). Following the service, we will gather for lunch about ½ mile north of the Church at Foss Lewis Park- 275 Lewis Park Dr, Bountiful, UT (approx. 2700 South, just east of Davis Blvd). Contact info: [email protected]

The family of Eric Thomas Morgan created this Life Tributes page to make it easy to share your memories.