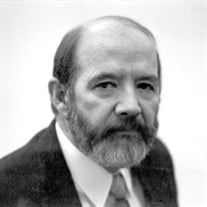 Ernest William Simmons (Bill) passed away the morning of July 23rd, 2020 at his home surrounded by his loved ones. Bill’s great life loves were his family and his faith. A tender soul, he was beloved by his children, grandchildren, great grandchildren, siblings, nieces and nephews as well as any animal that crossed his path. Bill was a Boy Scout and was very proud of the badges he earned. He enjoyed the outdoors - a love he later instilled in his children whom he would take hiking and camping, much to their great joy. Bill was a life-long faithful member of the LDS church and served the church in many capacities throughout his life. Bill was born in Driggs, Idaho January 24, 1931 to David and Isabella Simmons, the second of eleven children. Born during the depression, Bill learned the value of hard work young, but his passion was in academics and, despite the occasional teasing, was a deep thinker and did well in school. After he was married he diligently sought to learn his wife’s native tongue, Danish. Bill enlisted in the Navy at 19 and served honorably for four years. His naval friends and adventures left an indelible impression on his life. After receiving his honorable discharge, Bill enrolled at BYU from which he earned a degree in Economics. After graduation, Bill started working at Utah Employment Security as a statistician/labor market economist, where he had a successful career until retirement 35 years later. Bill met his lively life-long companion, Hanne, at a church dance, while living in the Avenues in Salt Lake City. Hanne was funny and Bill had a great sense of humor. They both also appreciated music. Bill enjoyed singing and and sung in public frequently in his youth. As an adult his love of music ranged from Wagner to Louis Prima with the Highway Men in between. Bill and Hanne were married within a year after they met and later sealed in the LDS Temple. They raised four children in their home in Cottonwood Heights. 60 years after their marriage the two were still laughing and dancing together. Bill is survived by his wife, Hanne, children Michael, Rebecca (Tim Walden), Diane and Kathryn (Stephen Newell), eight grandchildren, three great grandchildren and seven siblings. He is preceded in death by his son Mark Christian, his parents and three siblings. There will be a private viewing held Thursday, July, 30 from 8:30 AM to 9:30 AM at Premier Funeral Home, 67 East 8000 South, Midvale, followed by a private graveside service at 10 AM at Veterans Cemetery and Memorial Park, 17111 South Camp Williams Road, Bluffdale. Complete obituary at premierfuneral.com.

Ernest William Simmons (Bill) passed away the morning of July 23rd, 2020 at his home surrounded by his loved ones. Bill&#8217;s great life loves were his family and his faith. A tender soul, he was beloved by his children, grandchildren, great... View Obituary & Service Information

The family of Ernest William Simmons created this Life Tributes page to make it easy to share your memories.

Ernest William Simmons (Bill) passed away the morning of July...