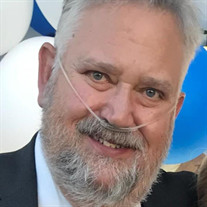 Ernest Russell Stapley (July 20, 1961-March 24, 2022, age 60) Our sweet and loving husband, father, grandfather, cousin, brother, and friend passed away due to heart issues on Thursday, March 24, 2022. Ernest “Ernie” Russell Stapley was born July 20, 1961, in Salt Lake City, Utah to Merlin Russell Stapley and Alta Jean Lundell. He grew up in Salt Lake City, Utah, and graduated from Granite High School in 1979. Ernie's older sister, Connie, had passed away in a car accident in 1978, leaving behind three daughters: Jeanie, Cindy, and Sally. Ernie and Alta loved and raised these girls, and Ernie became a combination of brother, dad, and uncle, or "brodunkle," to them. Despite the difficult financial situation facing his family, Ernie prayerfully and faithfully chose to serve a mission for The Church of Jesus Christ of Latter-day Saints in the Denver, Colorado Mission. Ernie would recount to his family throughout his life that he knew he was "blessed beyond measure" for his decision to serve. After completing his missionary service, Ernie met Jillynn “Jill” Heap and married her on September 29, 1984. They were later sealed in the Salt Lake City Temple in October 1985, along with their newborn son, Wesley. Ernie and Jill were married for 32 years, living in Sandy, Utah for 29 of those years. Ernie worked several jobs in the food industry, eventually committing to Frito-Lay as a store vendor in 1994 until he was forced into medical retirement due to poor health in 2016. Ernie was a devoted father to his five boys, and considered Jill's nephew, Jacob, to be his sixth son. Ernie developed deep roots in his Sandy neighborhood. He served on the neighborhood watch, and organized yearly block parties for decades, personally inviting every person on his street to attend. Even after his health declined, Ernie did his best to keep the block party tradition alive. Ernie was deeply devoted to his faith, but was well known for loving everyone and not placing importance on personal beliefs. He was known to just sit and talk with anyone, and was fast friends with people from all walks of life. On November 7, 2017, Jill Stapley passed away due to a sudden medical issue. While Ernie was devastated by the loss of his first companion, he again moved forward with faith. He was rewarded by meeting Lana Christina Barbosa de Sousa, who became his beloved second wife. Although Lana and Ernie faced a language barrier, they were able to communicate their love for each other with ease. After a year of dating, Ernie and Lana were married on July 31, 2020. Ernie lived the final years of his life enjoying some of the comforts he had denied himself in his working years. He spent time boating, fishing, camping in his travel trailer, driving his dream truck, and generally focusing his time on being with family and friends. Even though Ernie’s health prevented him from strenuous activity, he found ways to create joy in his life. In February 2022, Ernie fulfilled what he considered his final tasks in this life. On February 18, 2022, Ernie and Lana were sealed for time and all eternity in the Jordan River Temple. Ernie was also blessed to confirm his grandson, Malcolm, into his faith on February 26, 2022. During that occasion, Ernie stood and testified that he knew he had been preserved for Malcolm's baptism and confirmation due to faith and desire. Shortly after these events, Ernie's health declined. Ernie spent most of his final weeks of life in and out of the hospital, eventually succumbing to a cardiac event while returning home from the hospital with Lana. Ernie will be remembered for his love of Western music and Native American art, Elvis impersonations, storytelling, practical jokes, church and community service, and time spent watching the Utah Jazz. He is survived by his loving wife, Lana; his five sons, Wesley (Kristal), Shane (Channing), Carson (Danielle), Bennett, and Parker; step-daughters Roberta, Cynthia, and Nidia (Tiago); sisters, Merla (Kerry) and Betty; grandchildren, Rykin, Malcolm, Hunter, Simon, Rowan, Marielle, Remy; step-grandchildren Lauren, Jean, Logan, Melissa, Arthur, and William; nephew-claimed-as-son, Jacob; and nieces-claimed-as-sisters/daughters, Jeanie (Bryan), Cindy (Chase), and Sally (Kenny), as well as other cousins, nieces, and nephews. Ernie was predeceased by his parents; sisters, Alice and Connie; and first wife, Jill. He will be missed by many who were fortunate to call him family or friend. A viewing will be held on Thursday, March 31 from 6:00-8:00 PM at the Church of Jesus Christ of Latter-day Saints located at 949 E 10600 S, Sandy, UT 84094. Funeral services will be held at the same location on Friday, April 1, 2022 at 11:00 AM, with a viewing to be held from 9:45-10:45 AM. Ernie's grave will be dedicated at Lakeview Cemetery, 1640 Lakeview Dr, Bountiful, UT 84010 at 2:30 PM. To watch the services online or to share a memory of Ernie with his family, please visit www.premierfuneral.com. The YouTube link is also available at https://www.youtube.com/channel/UCOOdjLMi33esYLyvJCHekdw

The family of Ernest Russell Stapley created this Life Tributes page to make it easy to share your memories.