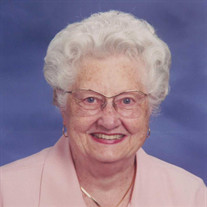 Gertrude Esther “Mamie”Palmer Apgood 1920 - 2016 Gertrude Esther "Mamie" Palmer Apgood was born September 10, 1920 on the family farm in a two room home built by her Daddy, Johnie and her four uncles. Their home in Milo, Idaho was a farming community a few miles northeast of Idaho Falls, Idaho. Esther had an older sister, Edna, with red hair and a younger brother, Drue, the baby of the family. Farm life was hard work and Esther did her share of churning butter, feeding ranch hands at harvest time and cleaning oil lamps. As the years passed her father added on to their home making it a home with plumbing, electricity, a furnace and a bathroom with a very large claw foot tub. She graduated from Ucon High school in 1937 and moved to Idaho Falls to marry Dale Marvin Apgood. They were married in the Salt Lake LDS temple. Dale was called into the service and left mom with their young son, Robert. Esther moved back to Milo until Dale returned from the service. Esther and Dale lived in Idaho Falls for thirty years and owned and operated the first and only licensed day-care center in Idaho Falls. Their daughter, Margaret was born into a nursery and playroom full of children and never lacked playmates. In 1970 Esther sold her business and she and Dale moved to Salt Lake City to be closer to their children and grandchildren. She remained in touch with many of "her children" that she had cared for in the Idaho Falls nursery. It was in Salt Lake that Esther was somehow given the name of "Mamie" by a friend and it stuck. She loved the name and from then on, she was and always will be our Mamie. Esther was a wonderful seamstress, making beautiful clothes for her family and friends and costumes for theater groups. She loved to knit and crochet making countless pillowcases, vests, coats, capes, and scarves. She made professional pleated drapes for her home, special birthday cakes for all the grandchildren and the lightest most delicious rolls. She loved See's chocolates and playing pinochle (usually in that order) and was always ready for a game. She would "shoot the moon" and it was a treat to watch her play. Holidays were synonymous with being at Mamie's and her baking was legendary oftentimes started days in advance. Her pies, rolls, and dressing will never see an equal and the days of preparation culminated in pinochle and Dr. Pepper around the table with friends and loved ones. When Dale passed away, Esther decided to go back to work and began working at the Boy Scouts of America at the age of 71. She enjoyed each person she worked with and made many friends. She knew her badges, how to fit a uniform and how to “guide” young scouts and their leaders. Soon, Esther and Margaret decided to sell their homes and they moved into a new life of condo living. Once again, Esther was happy with the new friends she had made and loved her new home. She retired from work at age 75. Esther and Margaret were happy to have had twenty-two plus years together, caring for each other and having fun when grandchildren and great-grandchildren would come for the holidays and visits. Esther was the matriarch of our family and dearly loved. She leaves a legacy of love and family. Daughter-in-law, Marsha Foreman Apgood with daughter Allyson (Jim) Tofel and their children Lauren, Carlee and Lexie; son, Tony (Lynne) Apgood with children Joshua and Luke; and son, Richard (Susan) Apgood with children Robert, Matthew and Rick. Esther's daughter, Margaret Apgood Tow with son James and children Harry, Jake and Ellie. Preceded in death by her parents, brother and sister, son Robert, grandson Brian Tow and many nieces, nephews, aunts and uncles and friends. We will miss you Mom, but are looking forward to being with you again. We will remember and treasure your legacy, devotion, love and friendship with family and friends. We love you Mom, grandma, great-grandma, Mamie and friend. Graveside services will be 12 Noon, Saturday, June 11, 2016 at the Salt Lake City Cemetery, 4th Avenue and "N"Street, Salt Lake City, Utah. A viewing will be held prior to services from 10:00 to 11:00 am, Saturday at the Highland Park Ward, 2535 South Douglas Street, Salt Lake City, Utah.

The family of Esther "Mamie" Apgood created this Life Tributes page to make it easy to share your memories.