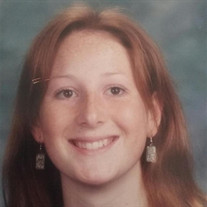 ESTIE ANN SMITH February 06 1980 - July 03, 2016 Estie Ann Smith our beloved and beautiful partner, mother, daughter, sister, aunt and friend after years of battling physical and mental trials has returned to her Heavenly Father on Sunday, July 03, 2016. Estie was born February 06, 1980 in Salt Lake City to Joseph M Smith and Melodie Smith Motock. Estie was intelligent, talented, kind, caring, compassionate, spiritual and a good listener. She won several local, state and regional competitions in drama and debate during high school. She enjoyed life, the ocean, swimming and doing acrobatics off the high dive. She was an avid reader and writer. Estie truly cared about people, was accepting, non-judgmental and looked for the good in everyone. She often found herself listening to someone’s troubles and problems. She was happiest when she was helping others and loved being with her family. Estie is survived by her soul mate, John Midgley; her beloved son, Julian Treglown; her mother, Melodie Motock; sisters, Caprese Hansen (Michael), Tristen Smith (Dustin Singley) Kira Motock and her brothers, Tyler Smith (Tracie), Jason Smith and 7 nieces and nephews. Estie is preceded in death by her father, Joseph Michael Smith and grandparents, Arthur G Frazier, Anna L Frazier, Joseph M Smith and Lois Smith. Our hearts are broken, our world a little darker. We will miss her humor, laughter, dramatic flare and unconditional love. We take comfort in her finally finding peace and love with her Heavenly Father and many relatives. We would like to thank everyone who contributed to her GoFundMe account and for all the support and love we’ve received. Graveside services will be held at 11:00 on Thursday, July 14, 2016 at Elysian Burial Gardens 1075 East 4580 South. A viewing will be held from 6:00 - 8:00 pm Wednesday, July 13, 2016 at the Taylorsville 23rd Ward located at 3200 West 4932 South.

The family of Estie Ann Smith created this Life Tributes page to make it easy to share your memories.