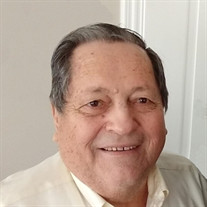 Eugene Nebeker Cook was born November 28, 1943 in Brigham City, Utah to Delbert and Marion (Nebeker) Cook. He passed away at home on October 30, 2018. Gene grew up helping his father on his dairy farm, and developed a great love for Holstein cows. He attended Box Elder High School, graduating in 1962. He later attended Utah State University and received his bachelor’s degree in Dairy Science in 1969. He married Dixie Taylor in June 1972, and they had 8 children together, though that marriage ended in divorce. Later, he met Priscilla Morgan, and they were married in the Mount Timpanogos Temple September 24, 2005. Gene purchased his own dairy farm in Jerome, Idaho, in 1972 and continued in that work until 1978. At that point, following an invasive back surgery, he began to work as a realtor, which he did until recently. He also loved sports, and would often travel to watch his grandchildren participate in them, and was a huge Jazz, Chiefs and Utah State Aggie fan. In high school, Gene ran track and was proud to earn a letterman’s jacket. He also was on the Jerome Idaho Recreation Board, and was the Secretary of the Jerome County Republican Party. Gene was a faithful member of the Church of Jesus Christ of Latter-day Saints. He served an honorable mission in the Bavarian Germany Mission from June 1963 to December 1965. He held several callings in The Church of Jesus Christ of Latter-day Saints, including Bishop and High Councilman. He is preceded in death by his parents, sister (Varlene Geddes), and daughter (Rachel Cook). Gene is survived by his wife, Priscilla; children, Inez Allridge (Kevin), Tyson Cook (Valerie), Ronald Cook (Yolanda), Nathan Cook (Hilary), Scott Cook (Jackie), Brett Cook (Kat), and Stephanie Hymas (Jared); sisters Barbara Chapman (Earl), Donna Smith (Ellis), and Annette Hacking (Grant); 37 grandchildren, 2 great-grandchildren and 9 step-grandchildren. Funeral services will be held November 5, 2018 at 12:00 noon at 1409 West Shields Lane (9800 South), South Jordan, Utah. There will be a family prayer meeting preceding the service, and a luncheon afterward for family. Inurnment will be at the Willard City Cemetery at 3:00 pm. There will be no viewing.

Eugene Nebeker Cook was born November 28, 1943 in Brigham City, Utah to Delbert and Marion (Nebeker) Cook. He passed away at home on October 30, 2018. Gene grew up helping his father on his dairy farm, and developed a great love for Holstein... View Obituary & Service Information

The family of Eugene Nebeker Cook created this Life Tributes page to make it easy to share your memories.