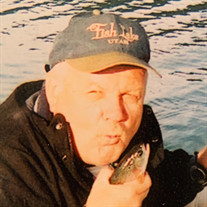 Eugene (Gene) Paul Hockenbury born July 14, 1945 returned home on November 9, 2019. Gene was born in Hopedale Illinois to Marion Peter Hockenbury and Orva Opal Blumenshine, he was one of 6 children. He married Emeline Erickson on September 5, 1969, they were sealed in the Salt Lake Temple and had four children. After losing his parents in 1957 he grew up in Glendale California and graduated from Hoover High. Gene served a mission in Florida, after his mission he moved to Salt Lake City and attended the University of Utah. Gene worked for the State of Utah as a Driver License Examiner and for the USPS. He also owned many of his own businesses including, janitorial, landscaping and vending. He loved to write, from poems to short stories eventually publishing his own book Crossing Bridges. Gene loved to fish especially in rivers and streams, he taught all of his children to fish. He loved to ride, logging thousands of miles on his road and mountain bike every summer. Gene was more than an avid Hockey fan. He was a season ticket holder with the Golden Eagles first then the Utah Grizzlies for 50 years. You always knew he was in attendance from his loud “Play Ball” after the National Anthem at each game. He was a faithful supporter to all of his children and grandchildren in all of their activities including swimming, hockey, baseball, softball, dance, soccer, musical talents and football. He loved to see them play and perform and was always their biggest fan. Gene is survived by his wife Emeline and his four children, Shelaine (Howard) Branden (Heather) Cortney and Candice. He was blessed with eight grandchildren. He was preceded in death by his parents and siblings. The family would like to send their love and appreciation to the staff at Carrington Court. Also, the wonderful people from Active Hospice. Funeral Services will be held Saturday November 16th 12:00 pm at The Glenmoor 7th Ward located at, 4147 W Skye Dr, South Jordan, UT 84009. A viewing will be held prior from 10:00 am to 12:00 pm prior to services. Interment to immediately follow services at: Elysian Burial Gardens, 1075 E 4580 S, Millcreek, UT 84117

The family of Eugene "Gene" Paul Hockenbury created this Life Tributes page to make it easy to share your memories.