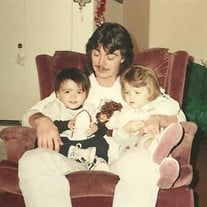 Eugene Russell Saxton Jr, 52, passed away peacefully in his sleep on January 9, 2017. He was born October 28, 1964 to Margaret Ann Peterson and Eugene Russell Saxton Sr. Gene had a love for the outdoors. If he wasn't fishing, camping or hunting he kept busy as a master electrician. He loved his work and took pride in his profession. He also donated a lot of his time to the American Legion. Gene loved to make people laugh and smile and he had a way of making everyone he came into contact with feel special and loved. Gene loved to cook, he was a pancake master and always made the best breakfast. He was always willing to help anyone out and was very generous with his time. Gene loved his family and had a very close and special relationship with his mom. Eugene Russell Saxton Jr is survived by Mother Margaret Ann Peterson, step father Alan Peterson, two sons, Alex Duley (Ashton Burr), Eugene Saxton III (Sarah), Grandson Andrew Duley, Brother John Saxton (Vicki), sisters Stephanie Power (Jeff) and Rusty Saxton, girlfriend Angela Thompson , step sister Tosha Farrer (Brandon), step brother Chuck Peterson (Naoko) and many nieces, nephews, cousins and friends. He is now in heaven with his father Eugene Russell Saxton Sr, younger brother William Saxton, along with other friends and family who have passed along the way. Memorial services will be held on Friday January 13, 2017 at 1pm - 5pm at IBEW Union Hall located on 2100 South 3400 West in Salt Lake City. Our family would like to thank everyone who has been a special part of Genes life, the wonderful staff at the University of Utah Hospital for their loving care and a very special thanks to his nurse Haley B. Gene was such a loving, caring and vivacious person and will be missed deeply. Heaven has gained an amazing angel. We love you Eugene Russell Saxton Jr.

Eugene Russell Saxton Jr, 52, passed away peacefully in his sleep on January 9, 2017. He was born October 28, 1964 to Margaret Ann Peterson and Eugene Russell Saxton Sr. Gene had a love for the outdoors. If he wasn't fishing, camping or hunting... View Obituary & Service Information

The family of Eugene Russell Saxton Jr created this Life Tributes page to make it easy to share your memories.

Eugene Russell Saxton Jr, 52, passed away peacefully in his sleep...