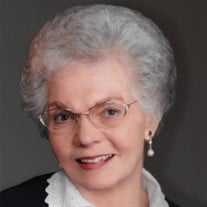 Eva Margene Steiner Goff 1930 - 2017 Our beloved wife, mother, grandmother, and great grandmother, Eva Margene Steiner Goff, 87, of Ogden, Utah, passed away peacefully of congestive heart failure on January 20, 2017, at her home, surrounded by family. In her final moments, her husband of 60 years, Harvey Douglas Goff, Sr., kissed her goodbye and expressed his love for her. Margene was born January 6, 1930, in Salt Lake City, Utah, the third of eight children of Glendon Eugene and Eva Hawkes Steiner. She graduated from East High School in 1948 and received a B.A. in Home Economics from the University of Utah in 1952. She served as a missionary for The Church of Jesus Christ of Latter-day Saints in the Swiss-Austrian Mission from 1953 to 1955. She married Harvey Douglas Goff on December 28, 1956, in the Salt Lake LDS Temple. They lived in New Jersey, for 12 years where their six children were born. In 1969 they moved to Ogden, Utah. Margene served in many callings in the Relief Society and Primary organizations. She and her husband served a mission for 30 months in the Ogden, Utah 4th Ward in the mid 1990’s. They also served in the Ogden LDS Temple. She was a loving and devoted wife, mother, and loyal friend. Margene was a talented seamstress. She also loved gardening, being outdoors, and making her surroundings beautiful. She was a meticulous homemaker. She sang beautifully, performing with “The Singing Mothers” at the Mormon Pavilion at the 1964 World’s Fair in New York City. She was involved for many years in the PTA and volunteered to teach reading to young children. In their later years, she enjoyed traveling with her husband and friends. For their 50th wedding anniversary, she, her husband and family celebrated together on a cruise to the Mexican Riviera. Margene was preceded in death by her parents, Glendon and Eva; brothers Richard Hawkes Steiner, Glendon Eugene (Marlene, deceased) Steiner, Jr. She is survived by her husband Harvey Douglas Goff, Sr.; six children, Harvey Douglas (Lisa) Goff, Jr., Ogden, David Reed (Carlin) Goff, Ogden, Steven Duane (Colette) Goff, Uintah, Carolee (Art) Brothers, Park City, Lorinda (Brent) Belnap, Ogden, Darrell Eugene (Tricia) Goff, Highland and two children from her husband’s first marriage, Craig (Nancy) Crocker, Mesa, Arizona, Cheri (Larry) Winzeler, Heber City; 33 grandchildren; 29 great grandchildren; and siblings Marilyn (Frank) Hammond, Kenneth (Vangie, deceased) Steiner, David (Mary) Steiner, Virginia (Armond) Beers, Gloria (Tom) Paulsen. The viewing will be held on Wednesday, January 25, at the Weber Heights Stake Center, 1401 Country Hills Drive, Ogden, from 6 to 8 p.m., and on Thursday, January 26, from 9:30 to 10:30 a.m., followed by funeral services at 11 a.m. Interment will be at Memorial Gardens of the Wasatch, South Ogden. The family wishes to especially thank Tambi Brown (caregiver) and Lissa Ahlat (IHC Hospice nurse) for their compassionate service. In lieu of flowers, the family asks contributions be made to the LDS Missionary Fund.

The family of Eva Margene Steiner Goff created this Life Tributes page to make it easy to share your memories.