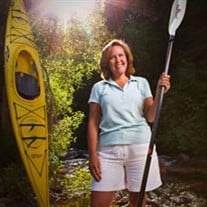 Eve Rose LeClaire, 54, passed away peacefully at her home Thursday March 19, after a long battle with cancer. Eve was born in Woonsocket, Rhode Island, soon after her mother immigrated from Germany. With her mother and father, she moved as a child from there to California, then back to Ogden after her mother’s and father’s divorce as a young child. She spent the next years growing up in Ogden when her mother remarried Avan Probasco of Clearfield, Utah. Unfortunately, Eve’s mother died when Eve was fifteen, of a heart attack. Her step father Avan continued to raise Eve until her marriage to Vince Toscan, also of Ogden. From this marriage came Maria Emilia, now 33, and Alan, now 29. In the early years of their marriage, Eve earned an Associate’s Degree in Business, allowing her to work as a bookkeeper and office manager for many years. Her organizational skills shined in her ten years in health care when she was employed by the University of Utah. She and Vince had moved to Salt Lake City. It was during this period of her life she was divorced from her first marriage. She then met her second husband, Tom Laucomer. After two years of courting, they were married in Salt Lake City. They honeymooned in Germany, Austria, and Switzerland. Eve and Tom had only been married a year before Eve was diagnosed with lung cancer, which was especially distressing because she had never smoked. Together they faced this challenge, traveling again to Europe twice, several times to the Northeast region where she was born. An avid canoer, she taught Tom her love of this sport, and they spent many wonderful days on the lakes of Yellowstone, Grand Teton National Park, as well as Mirror and Washington Lakes of the Uinta Mountains. She also embraced flat water kayaking, and returned to these waters many times, as well as the coastal waters of Maine. She was preceded in death by her Mother Eva and her Father Russell. She is survived by her husband Tom, daughter Maria (Heidi), and son Alan (Allison). There will be a rosary on Thursday, March 26th at 6:00 PM and the funeral will be Friday, March 27th at 10:00 am. Both services will be held at St. Thomas More Catholic Church. St. Thomas More is located at 3015 Creek Rd in Cottonwood Heights.

Eve Rose LeClaire, 54, passed away peacefully at her home Thursday March 19, after a long battle with cancer. Eve was born in Woonsocket, Rhode Island, soon after her mother immigrated from Germany. With her mother and father, she moved as... View Obituary & Service Information

The family of Eve Rose LeClaire created this Life Tributes page to make it easy to share your memories.

Eve Rose LeClaire, 54, passed away peacefully at her home Thursday...