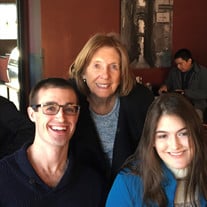 Faith Elizabeth (“Liz”) Quackenboss, 96, of Herriman, Utah, died September 12, 2019. Born to parents Faith Elizabeth Williams and Joseph Earl Vandagriff, in Los Angeles, California on December 14, 1922, Liz graduated from Cornell College in Mt. Vernon, Iowa. After college she lived in Evanston, Illinois where she worked for United Airlines, and met her husband, Frank Buckingham Quackenboss. After they were married, they lived in Cheyanne, Wyoming, and Vienna, Virginia, before moving to the Detroit area in 1957. Liz and her family lived for many years in Bloomfield Hills, Michigan. Liz moved to Utah in 2012 with her daughter Nancy’s family. Liz is survived by her four children, Harry Quackenboss, Nancy Q. Smith, Sara Smith, and Mary Quackenboss, grandchildren Lawrence, Vanessa, Walker, and Claire, and great grandchildren Reef and Isla. She was preceded in death by her husband, Frank Quackenboss, twin brother Joseph Earl (Bud)Vandagriff, Jr., younger brother Warren Vandagriff, and grandson, John Michael Quackenboss. Very active in her later years, Liz took up downhill skiing at age 65, and played tennis well into her eighties. She kept up with current events and read the Wall Street Journal daily. Elizabeth led a fulfilling volunteer life with the PEO Sisterhood and other community organizations. Elizabeth inspired in her children and grandchildren a love of learning, a commitment to hard work, and a passion for service. She will be dearly missed. Her family would like to thank her caregivers, particularly the staff at Beehive Homes of Riverton. Memorial contributions would be appreciated to the PEO Sisterhood, and JungleFriends.org. A private memorial will be held at a later date.

The family of Faith Elizabeth "Liz" Quackenboss created this Life Tributes page to make it easy to share your memories.