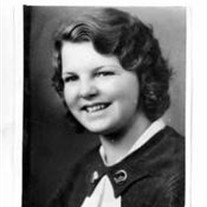 Fawn Jenson Somerville Dickerman Fawn was born in Monticello, UT, on April 16, 1915 She passed away at age 97 on December 9, 2012, in Draper, Utah Fawn arrived at a time when her parents were homesteading their farm southeast of the the little town of Monticello nestled at the base of the beautiful Blue Mountains (Abajo Mountain Range) Monticello, UT, San Juan County. It was April, 1915, and her parents had been clearing the land by hand to prepare it for farming. After little Fawn arrived she was right by her mother's side sleeping in a washtub as they worked. Her mother was a very talented seamstress and made all Fawn's clothes and dressed her like a little doll. Her father was a butcher by trade but he also farmed and raised pigs, cattle and lambs which he sold in his butcher shop. He was the first butcher in Monticello. Fawn went to school at Monticello Elementary and graduated from Monticello High School. There were 6 students in her graduating class. Fawn and her brother Ned were close in age and close friends throughout their lives sharing everything. Another little brother came along when Fawn was 8 years old but tragically died a 18 months later the day after Christmas. Her parents had two little girls 10 years younger than Fawn, Betty and Dawn. Fawn took care of the younger children cooked, cleaned ironed and curled the little girls hair while their parents worked to make a living Their family was complete and they were very happy. Fawn was a voracious reader. She studied and learned throughout her life. She had a great interest in and knowledge of the Native American culture and remembers at age 7 the army coming to put down the last Indian rebellion with Chief Posey. She remembers the Indians sitting under the large trees in her grandmother's yard and her aunts feeding them and caring for the little ones. After high school graduation, Fawn attended BYU. The summer before she had met a handsome cowboy from Moab, UT, Rulon Somerville, of the Scorup-Somerville Cattle Company. They fell in love and married after completing her Freshman year. As a new bride of 19, Fawn wanted to spend all her time with her wonderful husband. She suited up like one of the cowboys in men's Levis and rode horseback on the trail with her husband and his cowhands. Together she and Rulon and the cowboys rounded up the cattle, branding, ear marking, and dehorning them in the Spring. They drifted the cattle from the winter range to the summer range and back again. Rulon’s dad was a partner in the Scorup-Somerville Cattle Company. Rulon managed the cattle, horses, men and the land as Foreman of the Spring Creek and Head-of-The-Creek Ranches in San Juan County. It was a big job but he was very good at the management, and planning it took to do the job well. Fawn helped and supported him throughout his life. They eventually had 4 children (3 boys and a girl). The family spent the school year in their Monticello home and summers at the Ranch. Rulon died suddenly of a heart attack in 1956. Leaving her, a young mother, and the kids lost without him. Fawn went to work at her family's grocery store run by her mother and her brother since her dad's death. His butcher shop had grown over the years and now included a grocery, dry goods and meat market. It was the only store in town at the time. The store is still in operation providing goods, services and employment to the city. Later, Fawn met and married Edward D. Dickerman a metallurgical engineer who was working in Monticello. They lived in several places throughout their years together. Ed's work took them to Naturita & Durango, CO, Shiprock, NM, on the Navajo Nation, to the rolling green hills of Cambridge, OH, and back to Golden, CO. When Ed retired they moved to Salt Lake City and lived in the general area for the rest of their lives. Ed died in 1994 of Parkinson Disease. Fawn is survived by 3 children, Kedric Somerville, Callie (Joe) Beall, and Michael (Judee) Somerville and their families one daughter-in-law, Judy S. (Art) Cheney, and her family, one sister-in-law, Susan D. (Charles) Toomey, 13 grandchildren, 40 great grandchildren and 11 great-great grandchildren. They were a wonderful, loving support system for her and she loved them very much. Over the years Fawn has enjoyed many hobbies China painting, quilting, ceramics, reading and restoring furniture. She enjoyed traveling with her sisters and brother, her children and their families. Her sweet, kind nature garnered her many friends throughout her life. She was a life-long member of the Church of Jesus Christ of Latter Day Saints and had a strong testimony of the gospel. She quietly went about living the gospel - treating those around her as she would like to be treated. The family would like to thank the professionals at the Wentworth Assisted Living in Draper UT, and Curo Hospice who provided tender loving care.

Fawn Jenson Somerville Dickerman Fawn was born in Monticello, UT, on April 16, 1915 She passed away at age 97 on December 9, 2012, in Draper, Utah Fawn arrived at a time when her parents were homesteading their farm southeast of the... View Obituary & Service Information

The family of Fawn Jensen Dickerman created this Life Tributes page to make it easy to share your memories.