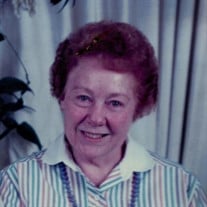 Fay Alice Taylor Howell Our dear mother, grandmother, and friend, Fay Alice Taylor Howell, returned to her Heavenly Father on Sunday, May 7, 2017 at her daughter’s home in Sandy, Utah. Fay was born June 15, 1923 to Wilford G. Taylor and Arby Sant Taylor in Terminal, Utah. Fay was a tomboy! Climbing trees, playing sports, riding bikes and horses were her favorite things to do with her friends and siblings, Verdell and Earl. Fay, an alto, and her older sister, Verdell, a soprano, spent much of their lives singing together and performing for others. Fay continued to sing in various groups throughout her life and at her passing she still had perfect pitch. After graduating from West High School, Fay attended the University of Utah where she excelled in typing and shorthand. She worked as a secretary for the Utah State Finance Commission at Fort Douglas. There she met and fell in love with a handsome young soldier, Earl R. Howell. Fay and Earl were married March 23, 1943 in Salt Lake City, Utah and were later sealed in the Salt Lake LDS Temple. They were blessed with a daughter, Shirley Alice and a son, Robert “Bob” Earl. Fay supported her children in all of their sports and activities. She was active in community affairs and served as a PTA President for many years. Fay and Earl grew the best tomatoes and cucumbers in town; always sharing them with family and neighbors. Everyone visiting the Howell home always received a warm welcome and lots of cookies and ice cream. The family resided in the Poplar Grove area of Salt Lake City. Fay lived there for 67 years. Fay later worked as a secretary for the LDS Church General Authorities, including Patriarch Eldred G. Smith, Ezra T. Benson, Delbert L. Stapley, Joseph B. Wirthlin, Robert Backman, Charles Didier, Arthur Kay, and George P. Lee. Fay loved her Savior, Jesus Christ, and was an active member of the Church of Jesus Christ of Latter-day Saints where she served faithfully in numerous assignments. She also served as a worker in the Salt Lake LDS Temple. Fay loved animals; especially cats. The stray cats in her neighborhood could always find food waiting for them on Fay’s back porch. Fay loved sweets, especially chocolate! She will be remembered for her generosity, kindness, service to others, and her happy disposition. Fay was preceded in death by her husband, parents, and siblings, Verdell and Earl. She is survived by her daughter Shirley (Michael) Russell, Sandy, Utah; son Bob (Kathy), South Jordan, Utah; 9 grandchildren, 34 great-grandchildren; 1 great-great-grandson and sister-in-law, Patricia Taylor-Carr, Cleveland, Texas. Funeral Services will be held Saturday, May 13, 2017 at 12 noon, with a viewing from 10:30 - 11:45 a.m. at the LDS Church, 10124 South 1300 West, South Jordan, Utah. Interment Wasatch Lawn Memorial Park, 3401 Highland Drive, Salt Lake City, Utah.

The family of Fay Alice Taylor Howell created this Life Tributes page to make it easy to share your memories.

Our dear mother, grandmother, and friend,...