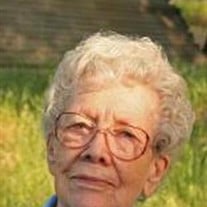 Florence Walker Cluff, 92, a long-time resident of Chandler, AZ passed away September 4, 2014 in Orem, UT; where she had recently moved with her daughter’s family. She was born in Mancos, CO on Feb. 11th, 1922 to William Jesse Walker and Vera Guymon. She was the eldest of seven children. She graduated Valedictorian from Central High School in Kirtland NM in 1938 where she excelled in academics, basketball and track. She attended college in Santa Monica, CA, but after one year of college, she returned to New Mexico where she had previously met and dated Alvin LaVor Cluff. They were married in the Salt Lake Temple October 1st, 1941. They lived in Kirtland NM, and Morenci, AZ, before finally settling in Chandler, AZ in 1945, where her husband operated a dairy and a fertilizer business. Florence was well known for providing piano lessons to many children in the community, and for being very active in the community as a precinct worker during elections. She was a life-long member of the Church of Jesus Christ of Latter-day Saints, serving for many years in Stake and Ward callings in the Chandler and Mesa Stakes and the Chandler 1st, 2nd and 3rd Wards. She was active in the Daughters of the Utah Pioneers and the Daughters of the American Revolution. Florence was a ward organist for many, many years and was blessed to once play the organ in Brigham City Tabernacle. Florence and Lavor had nine children, eight of whom survive her; Dr. William Cluff (Jeni), Donnice Martin, Valdon Cluff (Teri), Patrice Fairbanks, John Cluff, Maura Kluzik (Jerry), Vernene Petersen – deceased (Stan), Tammy Montgomery (Dave), and Colleen Jones (Rick). She will be missed as the Cluff Family Matriarch where her unconditional love and devotion to her immediate and extended family was always present. Her remarkable life touched 8 generations in-which she knew her great grandmother and lived to hold some of her great-great grand-children. She is survived by 2 living siblings, twin sisters Reta Stock of Nephi UT, and Neta Crum of Silver City NM; her 8 living children, 46 grand-children, 110 great-grand-children, 10 great-great-grand-children and the leafs continue to populate the branches of her family tree! Her charity and willingness to serve touched the lives of many around Chandler and all who knew her called her a friend. Her parents, 4 of her siblings, and her beloved husband of 43 years preceded Florence in death. Funeral services will be held on Saturday, Sept. 13, 2014 at 10:30am at the LDS Church – McQueen Building located at 17817 S. McQueen Road, Chandler, AZ 85249. There will be a viewing at 9:00 am at the same location. Interment will be at the Mesa City Cemetery.

Florence Walker Cluff, 92, a long-time resident of Chandler, AZ passed away September 4, 2014 in Orem, UT; where she had recently moved with her daughter&#8217;s family. She was born in Mancos, CO on Feb. 11th, 1922 to William Jesse Walker and... View Obituary & Service Information

The family of Florence Walker Cluff created this Life Tributes page to make it easy to share your memories.