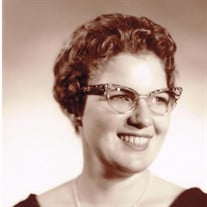 Florence Hermina Wilding Smith, 89, born in Rexburg, Idaho, on October 12, 1932, to Arnold Levere Wilding and Mary Elizabeth Zweifel Wilding, passed away in Bountiful, Utah on November 28, 2021. Florence, who loved being a resident at Barton Creek Assisted Living, passed away while residing at North Canyon Care Center, where she was recovering from a fall. After living with Congestive Heart Failure for many years, ultimately, she contracted Pneumonia five days prior to her death and passed away peacefully in her sleep. Florence lived a life full of giving, love, and service. In 1954, Florence graduated from Ricks College in Rexburg Idaho with a Bachelor’s degree in Elementary Education. In 1955 to 1957, she served as a Full-time Missionary for the Church of Jesus Christ of Latter-Day Saints in the New England Mission (USA). Upon returning from Mission service, she worked as an Elementary School Teacher (2nd and 3rd grades) in Shelley, Idaho, and Salt Lake City, Utah. In 1965, she met the love of her life, Sheldon Merrill Smith. They were married on May 31, 1965. As Sheldon had been married previously, Florence had the blessing of being called "Mom" first by Sheldon's four oldest (Cindy, Burke, Dru, and Taylor Smith). By 1970, Florence and Sheldon's family had grown with the births of Shawn, Shelly, Lorene, and Mariann. Even with the responsibility of 7 children of their own to care for, in 1972, Florence temporarily served as "nurse," "nanny," cook, housekeepeer, and "Best Aunt Ever," lending round-the-clock, caring support to her beloved "baby" sister (and her husband and 4 children), as her sister slipped away of Cancer. Sheldon and Florence took up new residency in Las Vegas, NV in 1976. There, Florence worked as a Teacher, for a time, before taking a position as a Microfiche Technician at Cragin & Pike Insurance, until she retired. In 2003, after 38 years of marriage, the last three months of Sheldon's life were spent with Florence at his side; she (almost single-handedly) cared for him, (as her husband's self-appointed) 24/7 "home care nurse," as he suffered with terminal cancer (and passed away in December of that year). This good woman had many talents, interests, and hobbies. She was known to always have a jigsaw puzzle project in progress. She had a green thumb and loved gardening and raising indoor plants. She enjoyed painting and coloring pictures and sharing the artwork to brighten someone else's day. Florence enjoyed talking to people and was always able to bring comfort and laughter to those around her. She loved spending time with family and friends, especially her grand- and great grand- children. She had many lifelong friends that she kept on in contact with over the years. Florence was survived by one sister: Dona (Steven) Wilding Haws; three brothers: Ronald (Donna) Wilding, Ross (Diane) Wilding, and Keith (Teri) Wilding; four stepchildren: Cindy (Guy) Smith Hemmert, Burke (Carrie) Smith, Dru Smith, and Taylor (Leta) Smith; three children: Shawn (Lynette Turner) Smith, Shelly (César) Smith Rubio, and Mariann (Greg) Smith Fessia; sixteen grandchildren; and one great grandchild. She was proceeded in death by her parents, Arnold Levere Wilding (89) and Mary Elizabeth Zweifel Wilding (79); sister, (Mrs. Dave) Dixie Wilding Wall (36); brother, Dale (Betty Jensen) Wilding (29); husband, Sheldon Merrill Smith (69) and daughter, (Mrs. R. Bruce) Lorene Smith Hicks (51). Funeral services will be Saturday, December 11, 2021, with a viewing at 11a.m. and funeral services to follow, at The Church of Jesus Christ of Latter-day Saints, 650 East 2150 South, Bountiful, Utah. Interment will be at Davis Memorial Park in Las Vegas, Nevada at 6200 South Eastern Avenue on Dec. 13, 2021 at 11:00 a.m. Funeral services provided by Premier Funeral Services. The funeral may be "attended" virtually on Zoom (Zoom app must be installed before joining the meeting) at the following link: https://zoom.us/j/99014115681 12 noon MTN standard time Condolences can be sent to the family at www.premierfuneral.com

The family of Florence Hermina Smith created this Life Tributes page to make it easy to share your memories.