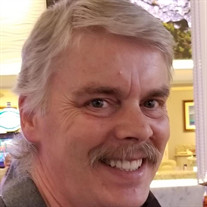 Floyd Wesley Masters passed away from a courageous battle with leukemia on January 7, 2021 in his sleep. He was born to his parents Caroline and John Masters on May 22, 1963 in San Francisco, California. He married Denise LeBeau on February 14, 2004 on the Ice at a Salt Lake Grizzly's Hockey game with 49 other couples at the E Center in Salt Lake City, Utah. Floyd attended Salt Lake Community College, majoring in Communications. He had a beautiful speaking and singing voice. He lit up the room with Frank Sinatra's "New York, New York." Floyd loved animals and nature-particularly his bunny "Midnight," held such a special place in his heart. He loved football and playing ice hockey with his stepsons Cody and Casey. He also loved baking and decorating for every holiday (especially Halloween). Floyd loved the snow covered mountains and often said that he was a mountain boy. Floyd was a man of many talents and he was good at what he did. Examples are carpentry at the U of U, cooking, logistics and service. He was previously employed at Harmon's Grocery. He loved his job with his beloved Hamon's family. Floyd is survived by his wife Denise, his children Billy and Jessie Thompson, (to former wife Lisa) and stepsons Cody (Amber), and Casey (Geneva) LeBeau. He is also survived by his sister Kathy Karsch (children, Shannon, Justin and Shanel), his brother Fred Phillips, nieces Brandy, Amber, Angie and Brittany (children of sister Lorretta), and his grandchildren Kylee, Abby, Ryder, Lilli and Addie. Floyd is preceded in death by his daughter Jennifer Taber, his parents Caroline and William "Bill" Phillips and his sister Lorretta. Floyd had such a kind heart and would do anything for anyone. He was truly loved and will be so deeply missed. A Celebration of Life for Floyd will be held at a later date.

Floyd Wesley Masters passed away from a courageous battle with leukemia on January 7, 2021 in his sleep. He was born to his parents Caroline and John Masters on May 22, 1963 in San Francisco, California. He married Denise LeBeau on February... View Obituary & Service Information

The family of Floyd Wesley Masters created this Life Tributes page to make it easy to share your memories.

Floyd Wesley Masters passed away from a courageous battle with...