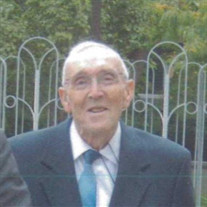 Floyd Robert Young 1932 – 2016 Floyd Robert Young, 84, Chancellor Gardens Clearfield formerly of Clinton returned to his Heavenly Father and his loving wife Carroll on Monday, July 11, 2016. Floyd was a beloved husband, father, brother, son, grandpa and great grandpa. Floyd was an active member of the LDS church and married Carroll Elizabeth Buchi in the Salt Lake Temple on December 9, 1955. Floyd was a member of the US Air Force. His 20 years of service in the Air Force took their family to 12 different locations throughout the country and overseas. After retiring they made their home in Sunset until 1992 after which time they made their final move to Clinton. After owing his own bakery, he joined the staff at McKay Dee Hospital as Head of Food Services which he later retired from. Floyd has always gotten so much joy out of cooking for his family and anyone that was hungry. One of his favorites to make was biscuits and gravy. He was known for making several pies on a regular basis and loved to share them with anyone who would take one. Floyd loved to golf and spent many days in his younger years fishing. Floyd was a kind man and was always ready with a one liner, joke or a story which was always followed up with a sweet smile. Many of those who crossed paths with him would say, “He Cracks Me Up”. He is survived by 4 of 6 children, Bruce Young (Micheline), Kathryn Young, Grant Young (Stacey), Robert Young (Patti) along with his grandchildren and great grandchildren. Proceeded in death by his wife, Carroll and daughters, Kelly and Sherrie. Funeral services will be 11:00 a.m., Saturday, July 16, 2016 at the LDS Chapel located at 1288 West 1300 North, Clinton, UT with a viewing prior to services from 9:00 to 10:30 a.m. Interment at the Syracuse City Cemetery 1290 South 1000 West, Syracuse, UT. We would like to thank Chancellor Gardens, Specialty Nursing and Comfort Worx Hospice for their dedicated love and care for him. His is loved very much and will be missed by many. In his own words, “Catch Ya Later” and “I’ll See Ya When I See Ya”!!!

The family of Floyd Robert Young created this Life Tributes page to make it easy to share your memories.