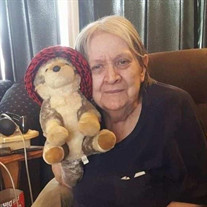 Frances Renee Anderson, simply known as “Mom” to anyone who has ever known her regardless of their relationship, passed away peacefully in her home on Sunday, April 5th. Frances was born on October 24th, 1941 to Francis J. & Donna Clark Wilson in Ogden, UT. She spoke of many fond memories of growing up on their family farm in Liberty, UT, especially the animals that she would name that were never meant to be pets. Her love of animals grew from that point & continued throughout her life. Frances met Ronald Herman Dittmer at a young age. They were soon married and had two sons, Ronald & Michael. Ronald Dittmer had served in the military and a short time later, Frances became a widow. After his death, she met Ronald George Wessler. During their years together, which resulted in two marriages, they had two daughters, Tracey & Rebecca. After their separation, Frances met the man who would become the love of her life, her partner for over forty-two years, Larry Vern Anderson. They connected at a New Year’s party, and only months later, they were married on June 23rd, 1977. They lived in the Sunset, UT area for a few years, and during this time, Frances gave birth to their daughter, Spring. Frances and Larry, also during this time, took in two of their grandchildren, Chris & Nikki, and raised them as their own. Larry, who is a Marine Veteran, worked for Union Pacific Railroad, and was transferred to Dillon, MT., so they relocated their family shortly after. Frances and Larry resided in Dillon for over twenty years, raising their family and making lifelong friends, most of which, turned into family. All of their kids and their friends would always be at her house playing games and just hanging out. She became a second mother to many and loved them all as her own. On April 1st, 2004, Larry and Frances’s house burned down, so they made the move and returned to Ogden, UT, where Frances spent the remainder of her days. Frances is preceded in death by her mother & father, her son Ronnie, her daughters: Rebecca & Nikki, & her sister Jean. Frances is survived by her husband Larry, her daughters: Spring (Scott) Zimmerman & Tracey (Tim) Davis, her sons: Michael “Mike” Dittmer & Chris (Kami) Dittmer, her sister Maurlene Nelson, her brother Blaine Wilson, and many nieces, nephews, cousins, grandchildren, great-grandchildren, & great great-grandchildren. “When God reached out his hand and called her home, she took it.” Cremation will take place at: Premier Funeral Services Crematory. As per Fran’s request, no funeral services will be held. In lieu of flowers, the family requests that donations be made to help pay for her final expenses on the GoFundMe page. Thank you to everyone for all of the thoughts and prayers during this difficult time.

Frances Renee Anderson, simply known as &#8220;Mom&#8221; to anyone who has ever known her regardless of their relationship, passed away peacefully in her home on Sunday, April 5th. Frances was born on October 24th, 1941 to Francis J. & Donna... View Obituary & Service Information

The family of Frances Renee Anderson created this Life Tributes page to make it easy to share your memories.

Frances Renee Anderson, simply known as “Mom” to anyone who has...