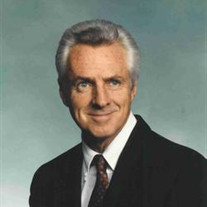 Dr. Francis Merrill Urry passed away Sunday July12, 2015 with his family at his side. Dearly loved by family and friends, he lived a productive and honorable life. He was born August 23, 1937 to Francis Lester Urry and Virginia Leona Carroll at LDS Hospital in Salt Lake City, UT. He was raised on the Avenues in a happy home and enjoyed his childhood and youth. In his young years, Fran and buddies spent much time playing at Lindsey Gardens, riding bicycles, camping in each other’s yards, attending Saturday movies for a nickel, and swimming at the old Deseret Gym. Fran attended Bryant Junior and South High Schools before his family moved to Burbank, CA for a year where he attended Burbank High and played football and basketball. After returning to SLC he completed school at West High graduating in 1955. He attendedthe University of Utah, earned two degrees from the University of Florida, and attained a PhD in Toxicology atUtah State University. Summer of 1956, Fran was hired by Utah Power & Light as part of a surveying team. On August13th the crew was in Monticello, Utah ready to begin a new job. The Lariat Café was busy and four of the six-man team, including Fran, were sitting in a corner booth. Without warning, the café exploded from a gas leak and the entire roof was blasted above the café before it slammed back down. Fran and the man next to him were blown out between the wall and descending roof. They landed on grass outside and were unharmed. The two men sitting across from them were blown into the cellar with minor injuries. 15 people were killed in the Lariat Café explosion that day and 21 more injured. Fran never forgot this life-changing event,how miraculously his life was spared, or those who were hurt or lost. Because of this profound eventFran, in his quiet way, resolved that the rest of his life would count for good in every possible way. An active member of the Church of Jesus Christ of Latter-day Saints, he served an honorable 2-yr mission to the Southern States, whichincluded Florida, Georgia, South Carolina, and Alabama. He served as LDS Branch President in Chiefland, FL, and in three LDS bishoprics: Palatka, FL;LaMarque, TX; and SLC East Millcreek 6th Ward. Recently, he served as a veil worker in the Salt Lake Temple. March 1960 Fran joined the Marine Reserves, training in San Diego with the Second Battalion Platoon 226. Upon graduation he was designated Platoon Honorman. He finishedin the Marine Intelligence Corps based in Jacksonville, FL. Fran married Judith Evelyn Tilton of Palatka, FLon September 15, 1961 in the LDS Salt Lake Temple. They are the parents of 6 children: Tamara Dale Urry (Kenneth Pattinson), James Tilton Urry (Jeanette Magleby), Dan Tilton Urry (Stephanie Knowles), Shannon Leigh Gracen (Michael Schmidt), and Joseph Tilton Urry;16 grandchildren and four great-grandchildren.Also survived by sisters Grace Henderson (David), Jane Harris (Van), and Virginia Jensen (Rees).Proceeded in death by parents and baby daughter, Linda Rae Urry. Fran enjoyed learning, physical activity, dogs, square dancing (especially Fun Time Squares) and his friends. He cherished his family and was kind with a subtle sense of humor. Career: Faculty member of department of Pathology at the University of Texas Medical Branch, Galveston, TX; Utah State Public Health Laboratory Toxicologist for the State Medical Examiner and Director of the Laboratory; Dual appointment as ARUP Medical Director for the Toxicology and SAM labs andFaculty member and Professor in the University of Utah Department of Pathology. We thank Premier Funeral Services, Silverado Care Center, Home Care Assistance, and Silverado Hospice for skilled and thoughtful attention to Fran. A special thanks to Wendy Kichiro of HCA, an angel of wisdom and compassion. She made Fran’s last months at our home possible and pleasant. Funeral services will be held 11:00 a.m., Saturday, July 18, 2015 at the East Mill Creek LDS Stake Center, 3100 E. Craig Drive (3600 South), Salt Lake City, Utah where a viewing will be held Friday from 6:00 to 8:00 p.m. and Saturday morning prior to services from 9:30 to 10:45. Interment at the Salt Lake City Cemetery

Dr. Francis Merrill Urry passed away Sunday July12, 2015 with his family at his side. Dearly loved by family and friends, he lived a productive and honorable life. He was born August 23, 1937 to Francis Lester Urry and Virginia Leona Carroll... View Obituary & Service Information

The family of Francis "Fran" Merrill Urry created this Life Tributes page to make it easy to share your memories.