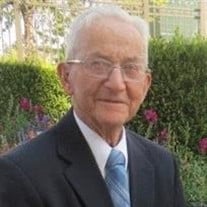 Frank Davidson Bagley died peacefully on January 11, 2020 at his home in Cottonwood Heights, Utah. He was born on August 2, 1928 in Murray, Utah, the fifth of six children born to Cyrene Neff and Martha Edna Davidson Bagley. Childhood and youth years were divided between the family ranch at Callao, Juab County, Utah (where the home was the ca. 1857 original Overland stage, Pony Express, and first transcontinental telegraph relay station), and the family home for schooling in Cottonwood, Salt Lake County, Utah. After graduation from Granite High School, he attended the University of Utah for two years and was called, in October 1948, to serve a mission for The Church of Jesus Christ of Latter-day Saints in Norway for 30 months. Upon his return home, he was inducted into the Army and served two years in the Army Intelligence Corps during the Korean War before returning to school at Utah State University in 1954. On September 9, 1955, Frank and Marlene Larson were married in the Salt Lake Temple. She is the daughter of Harold Axel and Elin Cecilia Larson of Banida, Franklin County, Idaho. They lived in Logan, Utah; then Pullman, Washington, where Calvin and Paul joined the family; next in Colma, California where Laura Marlene and Carolyn joined the family and also spent one summer in Gainesville, Florida, and lastly Cottonwood Heights, Utah, where Cynthia, Suzanne, Douglas and Rebecca completed the immediate family. Frank completed his BS studies in chemistry and math at Utah State University, and Marlene received her PhT degree (“Putting Hubby Thru”). Frank then completed his doctoral studies and research in Chemistry and Pharmaceutical Chemistry at Washington State University. Frank taught chemistry at San Francisco State College for five years and taught the first Institute classes for The Church of Jesus Christ of Latter-day Saints. Frank accepted a position with a Department of Defense Joint Services Organization in 1965 at the Deseret Test Center, located at Ft. Douglas, Utah, which was later merged with Dugway Proving Ground, from which he retired as the Chief of the Chemistry Laboratory Division. Frank was raised in the Church of Jesus Christ of Latter-day Saints by faithful and loving parents, having been baptized by his father on Sunday morning, August 1, 1937 in the large natural drainage ditch from the “Big Spring” in the meadows at Callao, Utah. He served faithfully in many callings in the Church of Jesus Christ of Latter-day Saints, such as missionary, cub master, varsity and explorer scout leader, home teacher, and MIA dance instructor (with Marlene) to Sunday School and priesthood class teacher, stake clerk, service on High Councils, President of the Harare Zimbabwe Mission (1997-2000), and temple ordinance worker. More importantly, he fully sustained and supported Marlene in her many callings of responsibilities and leadership in their family, and in the church and community. Frank loves his Savior Jesus Christ and he has always been a great example of how to be a disciple. Gardening was a passion for Frank and he shared all the produce and fruit from his and Marlene’s efforts to family, friends, and neighbors. Frank shared and helped all that he could with love and with a gallon of freshly pressed apple cider or hand-cranked ice cream. Frank is survived by his wife Marlene and children: Calvin (Patricia Chell); Paul (Debra Nay); Laura (Kent Payne); Carolyn (David Allen); Cynthia (Ken Shumway); Douglas (Jill Young); and Rebecca (Michael Bain); 31 grandchildren and 24 great-grandchildren; and brother in law Frank Pond Reese (Catherine). He was preceded in death by his infant daughter Suzanne, his parents, his two brothers: Charles R. and David C. (Reuvo Chamberlain), and his three sisters Marian Woodward (D.L.) and Jean Lloyd (Harvey), and Catherine Reese. Funeral services will be held on Saturday, January 18 at 10:00 a.m. at the Forest Bend Ward chapel—7784 South Highland Drive (2000 East), Cottonwood Heights, Utah. Viewings will be held at the same location on Friday, January 17 from 6:00–8:00 p.m. and Saturday prior to the service from 9:00–9:45 a.m.

Frank Davidson Bagley died peacefully on January 11, 2020 at his home in Cottonwood Heights, Utah. He was born on August 2, 1928 in Murray, Utah, the fifth of six children born to Cyrene Neff and Martha Edna Davidson Bagley. Childhood and youth... View Obituary & Service Information

The family of Frank Davidson Bagley created this Life Tributes page to make it easy to share your memories.