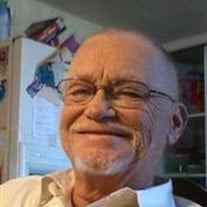 Frank Vincenzetti, age 60, passed away December 31st, 2012 with his wife Terri by his side, due to complications of renal failure. Frank was born September 11th 1952 in Sault Ste. Marie, Michigan to Vince and Norma Vincenzetti. He was born and raised Catholic, and he loved to share stories about attending Catholic school when he was a boy. He joined the military as soon as he was able, eager and willing to serve his country. Later on, when it came time for him to choose a profession, long haul truck driving just called to him. He wanted to see as much of the country as he could, and driving truck was what he absolutely loved doing. From the time he was young, Frank loved hunting, fishing and just spending time in the great outdoors. Some of the happiest momest of his life were spent sitting by a lake. He was an avid reader and loved old westerns. On June 6th, 1978, he married Terri Fitches and they began their life together. They have three children, Shanna (Tim) Carpentier, Paul (Kim) Dyche, and Zac (Shirley) Pau'u, 14 grandchildren and 4 great grandchildren. He was loved and adored by his young grandchildren and the feeling was likewise. He is survived by his wife, children, grandchildren, parents, and 3 sisters. He was preceded in death by his very beloved brother, Rick Vincenzetti. The family would like to extend a special note of gratitude to his sister in law, Joy DeBoer, for her dedication and help in caring for him during his final days and hours. Funeral services will be held at 11:00 a.m. on January 11, 2013 at 3247 South Hillsdale Drive West Valley City, Utah 84119. Interment will follow at Camp Williams Cemetery in Draper, Utah.

Frank Vincenzetti, age 60, passed away December 31st, 2012 with his wife Terri by his side, due to complications of renal failure. Frank was born September 11th 1952 in Sault Ste. Marie, Michigan to Vince and Norma Vincenzetti. He... View Obituary & Service Information

The family of Frank V Vincenzetti created this Life Tributes page to make it easy to share your memories.