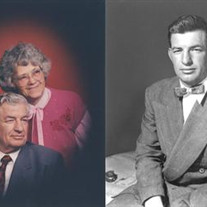 Fredrick Paul Thompson Sr. was born 25 Dec. 1927 in Wichita, Kansas. He was the son of Oliver Freeland Thompson and Rosie Ellen Brandon. He completed his earthly mission on 16 Sept. 2015. He grew up in Wichita. He was 16 1/2 when he joined the Merchant Marines on 13 July 1944. While on leave he met and married Flossie Inkelaar. After his tour of duty was finished he got a job with the Coleman Lamp and Stove Co. as a punch press operator where he lost a hand in an industrial accident. After the accident he worked two other jobs in Wichita over a period of 5 1/2 years before they decided he would go to college at Utah State University where he had a double major in education and horticulture. Upon graduating he was employed by the Utah State Road Department for six years. During this time he got a teaching certificate from Brigham Young University and started teaching at Granger Elementary in the Granite School District. He remained there for eight years. He subsequently worked as a research assistant on the Navajo-Kaparowich impact study for Edison Electric and then spent five years working for Utah County Parks and Recreation where he designed and supervised construction of Vivian Park up Provo Canyon. They later moved to Santa Cruz, California, where he worked as an apartment complex manager. While there he and Flossie received a call to the Columbus Ohio Mission and served there 20 months. They also served two other missions together, one as temple workers in the Oklahoma Temple while living in Wichita and one in the Salt Lake City Inner City Mission while living in Magna, their final residence. Later he and his son, Paul, served a mission at the Bishop’s Storehouse Gardens. He has served in many Church callings, including recently as a Stake Sunday School President and a primary teacher. He was a devoted husband and loving father, grandfather and great grandfather. He is survived by ten of his eleven children: Mary Alice Peterson (Stephen), Orson Thompson (Marilyn), Olive Bailey (Gerald), Rebekah Clement (Gary), Deborah Jackson (Lance), Carolyn Neeley (Michael), Sarah Ruth Scriver (Gary), Naomi Joy Bateman (Noland), John Thompson (Christine), and Rachael Nys (Scott). He was preceded in death by his oldest son, Fredrick Paul Thompson Jr., and his wife, Flossie Inkelaar. He also has numerous grandchildren and great grandchildren. A viewing will be held Thursday Sept. 24th between 6:00 and 8:00 pm at the Spencer Second Ward chapel. There will be a viewing prior to the funeral at 9:45 to 10:45 am. The funeral will be at 11:00 am Sept. 25th at the LDS chapel at 8059 West 2700 South. Interment will be at Utah Veterans Memorial Park, 17111 Camp Williams Road, Bluffdale, Utah.

Fredrick Paul Thompson Sr. was born 25 Dec. 1927 in Wichita, Kansas. He was the son of Oliver Freeland Thompson and Rosie Ellen Brandon. He completed his earthly mission on 16 Sept. 2015. He grew up in Wichita. He was 16 1/2 when he... View Obituary & Service Information

The family of Fredrick Paul Thompson Sr. created this Life Tributes page to make it easy to share your memories.