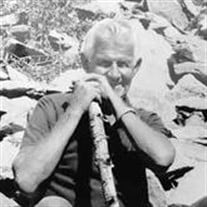 A life well lived! G.A. (Brig) Larsen, 87, a proud son and legend of Moab, took flight peacefully surrounded by his loving family in Salt Lake City on Thursday, June 8, 2017. The oldest of four sons to George A. Larsen and Bernice Egbert Larsen, he was born Feb. 17, 1930. Brig squeezed every ounce of life he could into his 87 trips around the sun. He was a lifelong resident of Moab, which he referred to as “God’s Country.” He had a big heart, spoke with some endearingly colorful adjectives, and had a warm smile that put everyone around him immediately at ease. Brig graduated from Grand County High School in 1948, where he was student body president and co-captain of the Moab Red Devils football team, which was just one of his many athletic achievements. After graduating, he completed basic training at Ft. Bragg in North Carolina, and then served honorably during the Korean War as an Army paratrooper with the 82nd Airborne. Upon returning to Moab, Brig drove truck, hauling fuel for Ken McDougald with Standard Oil to uranium mines in southern Utah, northern Arizona and western Colorado. A year later, Brig was given the opportunity to manage the Phillips 66 station in Moab. In 1956, Brig became partners with brother-in-law, Ralph Miller Jr., in the grocery, hardware and sporting goods store business. “Brig’s Sporting Goods” became the one-stop shop for people visiting Moab before they headed to the red rocks. Often times opening the store in the middle of the night for someone before a “big-hunt,” he exceeded all expectations in regards to customer service, honesty, integrity and a sense of humor. He took immense pride (in the times before GPS) in hand-drawing maps with meticulous detail for people coming to enjoy his “Outdoor Church.” With his grandkids undoubtedly violating child labor laws as they approved hunting licenses and ran the till, Brig could often be heard explaining to the novice huntsman why shooting a deer with a shotgun might not be the best idea. Eventually, the draw of those red rocks was too much — Brig’s Sporting Goods was sold in 1993. From that moment on, Brig was always on the go — riding his motorcycle through the canyons, hiking his treasured red rocks, exploring long forgotten Indian caves, feeding the birds, watching hikers on the hill above his home, hunting whatever was in season, walking his dog, Reina, and playing with his cat, Kitty. Family was always at the center of Brig’s life; his favorite statement was, “it’s always a good time with ‘You Kids.’” We were blessed with the most precious gifts of all — his love and time. One of his most cherished pastimes was cutting and polishing rocks he found in Moab and giving them out as keepsakes. Family and friends around the globe proudly display “Brig’s rocks” on their bookshelves, mantles, coffee tables, and wear them with pride as beautiful and coveted jewelry. Brig was also active in volunteering his time to the Colorado River Friendship Cruise, bringing together friends and “friends he had yet to meet” in a fun environment for all. He also spent time pulling people with “more courage than sense” off the Moab hills with Grand County Search and Rescue. When circumstances were more remote he used the Jeep Posse; a group of avid Jeepers ready to assist in places that were only accessible to that unique vehicle. This love of Jeeping led to him helping start the first Jeep Safari in 1967. Telling his son Greg to “run-like-hell” as he lit the fuse to a stick of dynamite was a common theme as they formed the Moab Rim Trail of the Moab Jeep Safari. Brig was a true steward of service to the community he was so proud of — always doing random acts of kindness. His attitude of patience, wisdom and positivity always seemed to point the way. Brig was preceded in death by his high school sweetheart, the love of his life and wife of 49 years, Gloria Patricia (Tish) Larsen (formerly Miller). Brig married Tish on Aug. 22, 1950; together they enjoyed cutting a rug, pushing each other’s buttons and spending time with their children and grandchildren. In addition to his parents, Brig was also preceded in death by three brothers: Roland, Willard and Butch. Surviving are three children: Pam Phillips (Bob), Marcia White (Bill), and Greg Larsen, all of the Salt Lake City area; and grandchildren: Melany White-Flory ( Brent) of Salt Lake City, Ryan White of Salt Lake City, Amanda Lenar (AJ) of Greenville, South Carolina, Lindsey Perez (Elias) of Salt Lake City, Ty Little (Crystal) of Salt Lake City and Dain Little of Portland, Oregon. Also surviving are four great-grandchildren: Cole and Kaitlyn Flory of Salt Lake City, and Aiden and Olivia Lenar of Greenville, South Carolina. The family wishes to express their sincere thanks to the VA Hospital staff, Dr. Stephanie Vetterli, Mt. Olympus Care Center staff, Active Home Health and Hospice, Dr. Ken Williams, Melody Sakrison, as well as caregivers Roberta Bergan, Bonnie Braithwaite, Jennie Massie and Dana Jordan for their exceptional service and loving care. A celebration of life to honor Brig will be held Tuesday, July 18 from 3 to 5 p.m. at Log Haven, located at 6451 Millcreek Canyon Road, Salt Lake City, Utah 84109. In lieu of flowers, the Larsen family requests donations be made in honor of Brig to the Alzheimer’s Association for research in curing Alzheimer’s and dementia. Go to ALZ.org, click Donate/Other ways to donate/Tributes/”Find a Tribute”/Search for: G.A. (Brig) Larsen Memorial Fund. http://moabtimes.com/bookmark/27457881/article-Card-of-Thanks.

The family of GA Larsen created this Life Tributes page to make it easy to share your memories.