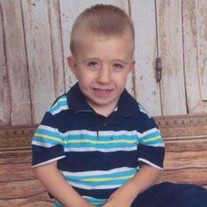 Gage Wyatt Murray, died May 29, 2015 from an unexpected accident. Gage was born on June 8, 2011 in Bountiful, Utah. Gage is the adorable third son of Nathan and Lillie Murray. Gage is survived by his Great Grandmothers, Dorothy Lambson, and Betty Arnett, Grandparents, Mark Lambson, Janet Child, Robert Murray, and his beloved Grandmother, Idonna. His two brothers Ty, and Cole were his best friends. Gage was loved by many aunts, uncles, and cousins. His death coincides with his sweet cousin, Katherine Child (age 4). Gage was born with a skeletal joint condition and a muscular dystrophy. His first years were filled with many surgeries, and braces. He never complained.Gage was bigger than his body gave him credit for. Gage’s two brother’s Ty (10) and Cole (9) doted on him. They proudly showed Gage offand demonstrated how smart and fun he was. Gage wanted to do everything that his brothers did. They included him in their basketball games. He played Bey Blades, Legos, and board games. He loved to be read stories. His last story was “The Incredible Jelly Bean Day”. He loved to watch Mickey Mouse Clubhouse and that’s how he learned he wanted to go to the beach. Gage loved putting puzzles together with his grandmother, and helping her in the garden. His final day with his family was a particularly wonderful one. He walked down the sidewalk holding his mom’s hand saying “don’t step on the potato bug”, and singing “Ring around the Rosie”. His father held him in his arms as they took things apart. As Gage ate dinner with his family, he teased and laughed with his brothers saying “I beat you”. His father said “This is a moment of bliss”, one that we wanted to keep forever. Later, Wednesday evening Gage was playing in the backyard trampoline with his brothers and friends. He insisted on going the swing. The swing had not yet been pushed and Gage fell about 1 1/2 feet on to the grass. When he landed something in his brain was damaged. He had bleeding and pressure that resulted in a fatal brain injury. Gage was on life support at Primary Children’s Hospital for two days until preparations were made to have his organs donated. Gage will be missed by many. Over the years he has had many Drs, therapists, teachers, and neighbors who have helped him to thrive. He was and is the light of our life. During our four years with him we have experienced many miracles. We were blessed to have him live and teach us how to live. The Atonement of Jesus Christ is real to us and we look forward to the day when Gage will be with us again. The eternal love that we have for Gage intensifies our grief, yet we know that through this, the Savior succors us. A Birthday Memorial will be held in his honor 11:00 a.m., Saturday, June 6th 2015 at the LDS chapel, 14 Bonanza Rd. Farmington, UT. In lieu of flowers, donations may be made to the Gage Murray Memorial Fund at Mountain America Credit Union. We wish to express our deepest gratitude to the team at Shriner’s Hospital for Children. They helped fulfilled the vision, “I walk, I walk”.

Gage Wyatt Murray, died May 29, 2015 from an unexpected accident. Gage was born on June 8, 2011 in Bountiful, Utah. Gage is the adorable third son of Nathan and Lillie Murray. Gage is survived by his Great Grandmothers, Dorothy Lambson,... View Obituary & Service Information

The family of Gage Wyatt Murray created this Life Tributes page to make it easy to share your memories.