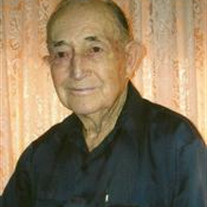 Our beloved husband, father, grandfather, brother and uncle, Garn V Carter 88 of Provo, Utah passed away July 7, 2013 from causes incident to age. Garn was born in Provo, Utah, March 22, 1925 the son of Vern and Maude Carter. He was raised in Provo, and spent his whole life there. Garn started his career as a taxi driver; he then worked in an Air Craft Plant during WWII. He then apprenticed in carpentry and worked as a carpenter for several years. He completed his career as a Letter Carrier which he retired from after 26 years of service. He married his wife Lenore on February 7, 1953. Their marriage was later sealed in the Salt Lake Temple on May 24, 1967. Garn loved to fish, hunt, hunt for arrowheads and work in his garden. Later he became an avid golfer. He spent many mornings at the Provo golf course with the “over the hill gang”. Garn was an active member of the LDS church. He served in many callings in the church. He was also a temple worker in the Provo Temple for 6 years and loved serving there. He is survived by his beloved wife of 60 years, Lenore Carter, 4 children; Wayne (Robin) Carter, Rodney Carter, Marvin (Michelle) Carter, Alan Carter, 12 grandchildren and 26 great grandchildren. He had 5 siblings that he loved very much. Garn was a big brother to Helen Zobell, Laverne Hancock, Betty Johnson, Orvil Carter, and Darwin (Clara) Carter. He was preceded in death by his sister Helen Zobell and daughter Judy Ann Carter. Funeral services will be held at 12:00 p.m., Friday, July 12, 2013 at the Sunset 9th Ward Chapel, 1515 South 1100 West, Provo, UT. A viewing will be held prior to the services from 10:30 a.m. until 11:45 a.m. Interment at East Lawn Cemetery, Provo, UT.

Our beloved husband, father, grandfather, brother and uncle, Garn V Carter 88 of Provo, Utah passed away July 7, 2013 from causes incident to age. Garn was born in Provo, Utah, March 22, 1925 the son of Vern and Maude Carter. He was raised... View Obituary & Service Information

The family of Garn V Carter created this Life Tributes page to make it easy to share your memories.