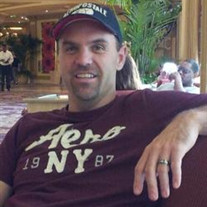 Garth Hugh Nielson, while surrounded by his wife and daughters, was called home to his Heavenly Father on June 18, 2014, after a short, but stalwart battle with cancer. He is greatly missed by all who were fortunate enough to call him husband, father, son, brother, uncle, and friend. Garth was born March 12, 1974, in Payson, Utah, to Bill and Cheri Nielson, the final of six children. Garth loved working with his dad on their cattle ranch, and especially appreciated his dad’s strong work ethic. He excelled in sports, particularly football and wrestling. His senior year of high school, he was the state wrestling champion in his weight class—Rich High School’s first-ever state champion wrestler. In 1993-1995, Garth served an LDS mission to Brazil, São Paulo South; he loved the Brazilian people and continued to keep in touch with many of his Brazilian friends and companions. He married Monica Pimentel in 1995, and over the next 12 years, they added five beautiful daughters to their family. They later divorced. On October 20, 2012, after a whirlwind courtship, Garth married the love of his life, Melanie Gibby. They loved attending plays—Garth proposed at Tuacahn during a performance of Aladdin—and just being together. A short 11 months after they were married, they were blessed with a sixth daughter, Zoey. The accomplishment Garth was most proud of in his life was his daughters, who he doted on and loved unconditionally. He was especially enthusiastic about soccer and tirelessly supported them in practices, games, and even coaching. Garth adored all of his girls and cherished every moment he was able to spend with them. His final thoughts in this life were only for his wife and daughters. All who knew Garth treasured his big heart, his love of people, and his laidback attitude. Some of his daughters’ favorite traits of their dad were his pride in them, how he put others’ needs before his own, how he was always there for them, and how he would take them to Randolph to ride horses. Garth is survived by his adoring wife, Melanie; his darling daughters Jennyfer Monica, Sarah Eloiza, Jessica Valeria, Trinity Brooke, Sofia Cheri, and Zoey Anne; his cherished parents, Bill and Cheri; his devoted siblings Sandra (Ken) Robinson, Christine (Jerry) Chadwick, Bill (Kay) Nielson, Stephanie (Kevin) Terry, and Jeneal (Mike) Christensen; his grandmother, Ethel Mae Nielson; and numerous nieces and nephews. He was described by many as the “favorite uncle.” He was preceded in death by his grandparents, Albert Senius Nielson II, and Keith Whitney and Arvadele Weter Ward; and his uncle Albert Senius Nielson III. Services will be held Saturday, June 21, 2014, at 11:00 AM, with viewings on Friday, June 20, 6-8 PM, and Saturday, June 21, 9:45-10:45 AM, at the Slate Canyon Chapel, 1745 S. State Street, Provo, Utah. Remembrances can be made online at www.premierfuneral.com. In lieu of flowers, donations can be made at Utah Community Credit Union in Garth’s name to offset medical and funeral expenses and to help provide for his wife and daughters. The family wishes to thank his wife, Melanie, for her devoted care of Garth in his final days; the members of the Slate Canyon 10th ward who provided countless meals and service; as well as Intermountain Hospice Care, who attended to Garth and his family with kindness and compassion.

Garth Hugh Nielson, while surrounded by his wife and daughters, was called home to his Heavenly Father on June 18, 2014, after a short, but stalwart battle with cancer. He is greatly missed by all who were fortunate enough to call him husband,... View Obituary & Service Information

The family of Garth Hugh Nielson created this Life Tributes page to make it easy to share your memories.

Garth Hugh Nielson, while surrounded by his wife and daughters,...