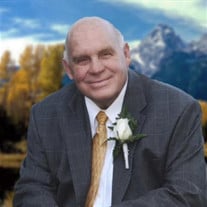 Garth Charles Rohde 1938 - 2018 Rohde, Garth Charles, 79, of Clinton, Utah took the next step in his eternal progression on Sunday, January 7, 2018 at 5:20 PM. His body succumbed to complications from a forty-year battle with diabetes. He passed peacefully in his sleep, surrounded by loved ones, knowing his family would take care of one another as he graciously taught and raised them to do. Garth was born to Charles W. Rohde and A. Geniell Rohde on May 28, 1938. He graduated class of 1956 from Ben Lomond High School in Ogden, Utah. His love for the sport of football earned him a full-ride scholarship to the University of Utah where he pursued his academic and athletic careers. Graduating in 1960, he attained a Bachelor’s of Science in Mechanical Engineering and proudly bore his Ute pride on the field every year as a full-back, #65. He cheered them on from the sidelines, or his recliner, for the rest of his days. While studying at the U, he married Carol (Grantham) in 1957 and together they had six children, Bret, Wendy, Tracee, Stacee, Michelle and David. Following their divorce, Garth wed his partner and eternal companion, Cathy (Jean Wade), on August 25, 1981. Cathy brought three children to this marriage, Shannon, Shane and Megan. Together, Garth and Cathy had Jessica and Leslie. As a couple, they raised their family as one, setting an example for all of us on how to be one big family, or as he would call it “the whole fam-damily”. He jokingly started referring to all his daughters as “sis” to help him from calling his daughters by the wrong names. His life was filled with admirable and overwhelming volumes of service. In his early years, he served in the United States Marine Corps from 1957 – 1963, though never called to active duty, he beamed with American pride to call himself a “jarhead”. Later, he served his community formally in various City Council roles in Clinton, Utah. He gave freely of his time as a member of the Church of Jesus Christ of Latter Day Saints and was called to serve as a Bishop and first-counselor for 12 years in North Ogden, and Stake High Councilor in Clinton for many more, in various roles as the Priesthood Leader for the Young Women’s Organization, genealogy and directed work on church farms. Garth spent a large share of his adult life with the Boy Scouts of America as a Scout Master, Wood Badge Director and was a recipient of the Silver Beaver award. His life and tenure on this earth was rooted in his unwavering testimony of the Lord and Savior Jesus Christ, sharing his faith and wisdom with any willing to listen. While working for the U.S. Government, Garth was both a Liaison and Lead Engineer on the Peacekeeper Missile systems, retiring after 28 years of service. This allowed him to pursue three of his greatest passions; fishing, carpentry and family. He started his own business, Rohde Custom Building, LLC., as a General Contractor and craftsman and took jobs near several National Parks while enjoying the opportunity to explore with his family. These various trips included fishing, hiking, fly-tying, wood carving, camping and meaningful mentorships with his children, grand-children, nieces and nephews. Whether from the pulpit, woodshop, in Mother Nature, over the phone or just being around him, Garth touched untold numbers of lives with his leadership and examples of hard work, discipline and duty to fulfilling the roles he was entrusted with. Telling people his advice is “worth what it cost you”, he lives on in the pearls of wisdom that have become priceless to those who received it. As he looks on his legacy and watches over us all, fresh Diet Coke in hand, sitting with his mother, father, grandson and countless others, he’d tell us all that “it doesn’t get any better than this.” Garth was preceded in death by his father, Charles William Rohde, his mother, Ardenta Geneill Thompson Rohde, his grandson, Kasey Charles Rohde, and his brother-in-law, Keith Combe. His legacy lives on through his wife, Cathy Jean Wade Rohde, brother, Val (Grethe) Rohde, sister, Marilyn Combe, sister Barabara (Jerry) Miller, sister, Charla (Steve) Hedgepeth, son, Bret (Sheryl) Rohde, daughter, Wendy (Dane) Allred, daughter, Tracee (Eric) Olsen, daughter, Stacee (Rick) Lefler, daughter, Michelle (Jeff) Cummins, son David (Shantell) Rohde, daughter, Shannon Archibald, son, Shane (Lindsey) Archibald, daughter, Megan (Monty) Sei, daughter, Jessica (Terry) Pierce, daughter, Leslie (Jake) Springer, 33 grand-children and 41 great-grandchildren. To celebrate his life and all the fun we have had with him, services will be held with a viewing, Friday, January 12, 2018 from 6:00 PM – 8:00 PM, a viewing Saturday, January 13 from 9:45 AM – 10:45 AM followed by a “fun”eral at 11:00 AM at the Clinton 1st Ward Church of Jesus Christ of Latter Day Saints located at 1288 W 1300 N in Clinton, Utah.

Garth Charles Rohde 1938 - 2018 Rohde, Garth Charles, 79, of Clinton, Utah took the next step in his eternal progression on Sunday, January 7, 2018 at 5:20 PM. His body succumbed to complications from a forty-year battle with diabetes. He... View Obituary & Service Information

The family of Garth Charles Rohde created this Life Tributes page to make it easy to share your memories.