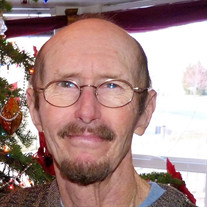 Gary Gene Phillipy Gary Gene Phillipy was born March 31st, 1944 at St. Joseph’s Hospital in Orange, California to Pleasant Edward Phillipy of Oklahoma and Jeanette Elvira Henage, of Liberty, Kansas. He died due to complications of COPD at the American Fork Hospital in Utah on the morning of January 22, 2019. Gary grew up in Huntington Beach, California where he enjoyed body surfing, boogie boarding and playing football. He also enjoyed running with his track team and earned several medals while doing so. Gary was the 5th child of 8 born into his family. Two infants died before birth, male and female, before his oldest brother, Dean Edward, was born. Darrell Eugene and then Gary were born next. Two living sisters were born after Gary, Renee Louise and Donna Jean. May Annette, the 7th child of this family, died before she was born and was laid to rest in the Westminster Memorial Cemetery in Orange Co., CA, where her parents have also been laid to rest. In October of 1963, Gary was drafted by the U.S. Army. He first attended boot camp at Fort Polk, in Louisiana. He served in combat in Vietnam for a time thereafter followed by service in Korea restoring telephone communications for a year and assisting orphans in getting groceries. After his service in Korea, he returned to the United States and worked at Fort Lee in Virginia where he was assigned to work in the laundry. After this duty, he continued his military service at Fort Bliss, Texas where he worked as a prison guard. During Gary’s military service, he earned a Marksman Award for his excellent shooting skills. After Gary finished his military service, his first job was working at a machine shop in Long Beach where he earned the going rate of a whopping $2.50 an hour. He also worked for the City of Newport Beach for 13 years doing field and street maintenance, painting piers and cleaning the beach. He then worked for the Department of Defense Seal Beach Weapons Naval Station where he worked on Navy ships as a mechanic and on missiles and sometimes worked very high above the ground. While Gary had survived his time in Vietnam during an active war unscathed, he had an unfortunate run-in with a gang of thugs following his military service. As he was on his driveway, one day in his younger years, he was attacked by a gang of men who he was able to fight off successfully until one of them hit him from behind with a crow-bar, cracking his skull. They then proceeded to hit him in the face repeatedly, crushing his face, which required extensive medical treatment. They were about to chain him to their car and drag him to his death, but his brother-in-law came to his rescue and was able to save his life, despite having his nose broken. Gary was blind in his left eye and deaf for while, but regained both of those senses after a period of time. This gang also attacked a couple down the road on the same day, also without motive. The attack left Gary with permanent damage to his brain, altering his life in many ways. Many years after this event, Gary was still single, but had a dream of a blond woman. Not long afterward, Gary met Melanie Akin through a mutual friend, who was Gary’s co-worker. After a whirlwind romance, Gary and Melanie married in Carson, Nevada on November 23rd, 1990 and had 28 years of happy marriage together. During the course of their life together, they have lived in Garden Grove, Anaheim and Costa Mesa, California, finally settling in Springville, Utah for retirement. After a fall backwards partway down his stairs a few years ago, Gary suffered a 2nd major head injury that required the need for a move into an assisted living facility where he and his wife lived until his passing. While living at the Osmond Senior Living Center, he was chosen as the President of the resident’s committee. He was able to address the questions and complaints of the residents and was able to make needed changes to improve their daily lives. Some things he was able to accomplish while serving were having a salad bar added to the dining room and increasing the Wal-mart trips from one trip a week in the early mornings to two trips in the same day to help those who didn’t like getting up early. He was also instrumental in getting the staff to clean up the laundry rooms. He was always happy to receive Wal-mart gift cards from Jared Osmond, in payment for his services. Many of the residents grew to love him because he helped improve their day to day lives and was a friend to all. While living at Osmond Senior Living, Gary’s favorite thing to do was to play Bingo. He loved to win the prizes they offered and had a fun, competitive streak. Gary enjoyed spending time with family. He spent many of his earlier years helping his mother and various other members of his family when they were in need. He was a good son, brother, uncle and husband. Gary was generally a peacemaker and often put others needs before his own. He went through a great deal in his life that was beyond his control, but handled it with a great deal of patience. He will be missed by those whom he leaves behind, which include his wife and her children, George Ramsey and Andrea (Jeff) Withers, three grandchildren by Andrea and other extended family. Gary was preceded in death by his parents. A graveside service will be held in the spring.

The family of Gary Gene Phillipy created this Life Tributes page to make it easy to share your memories.